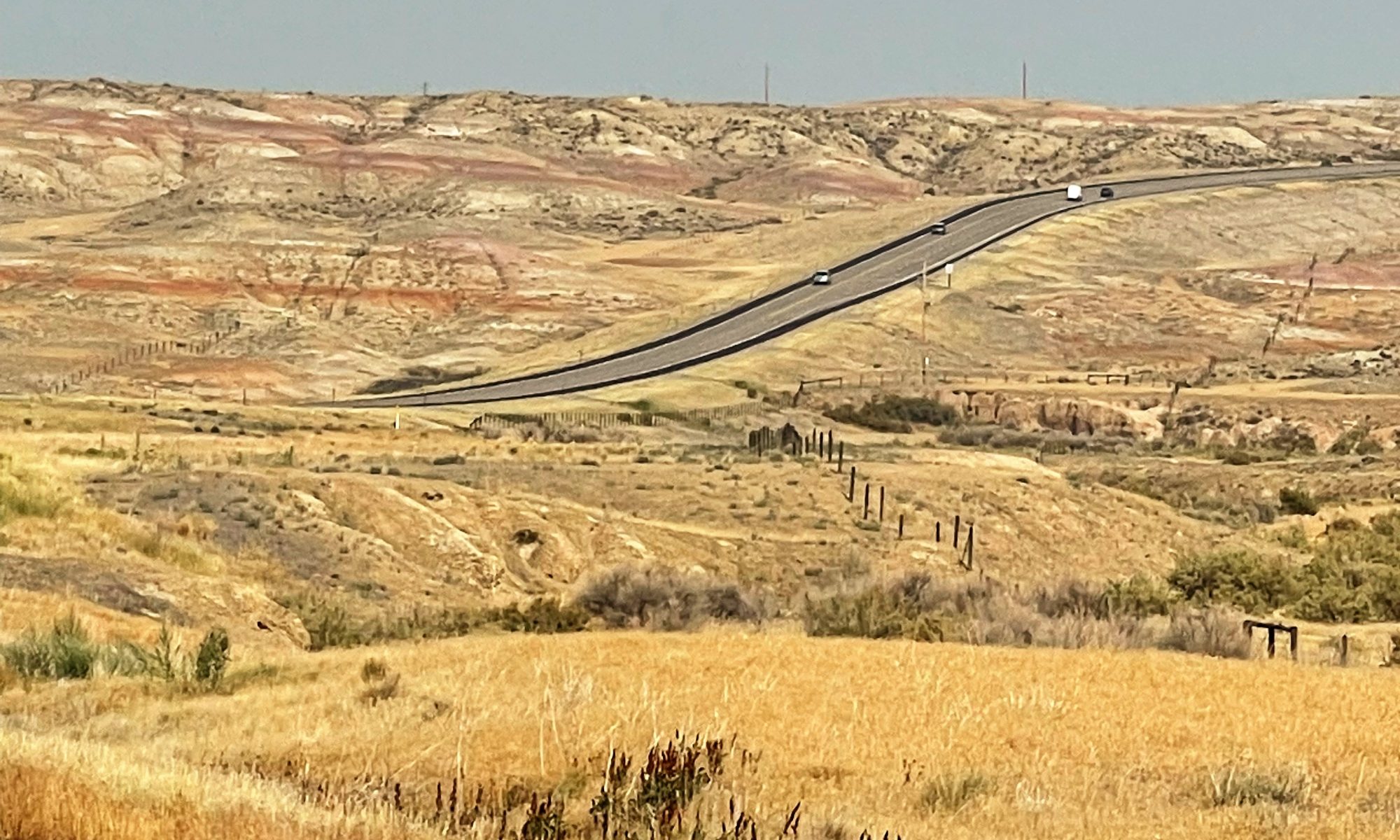 We left Yellowstone, heading east toward Cody. The landscape of Wyoming still did not disappoint. Three highways, 14, 20, and 16 merged along this route.

We loved being in the west, driving through ranches and between rocky mountainsides, both landscapes unfamiliar to us Midwesterners.

On this overnight between Yellowstone and the Mt. Rushmore area, we had planned to camp at a Walmart parking lot in Gillette, but temperatures were above 100 degrees. We knew we would need electricity to power our AC and fan,  so again that morning, and somewhat “last minute,” I made campsite reservations in Buffalo,. Later, we were glad we had made that contact early in the day, as we would have no cell service throughout most of the afternoon. 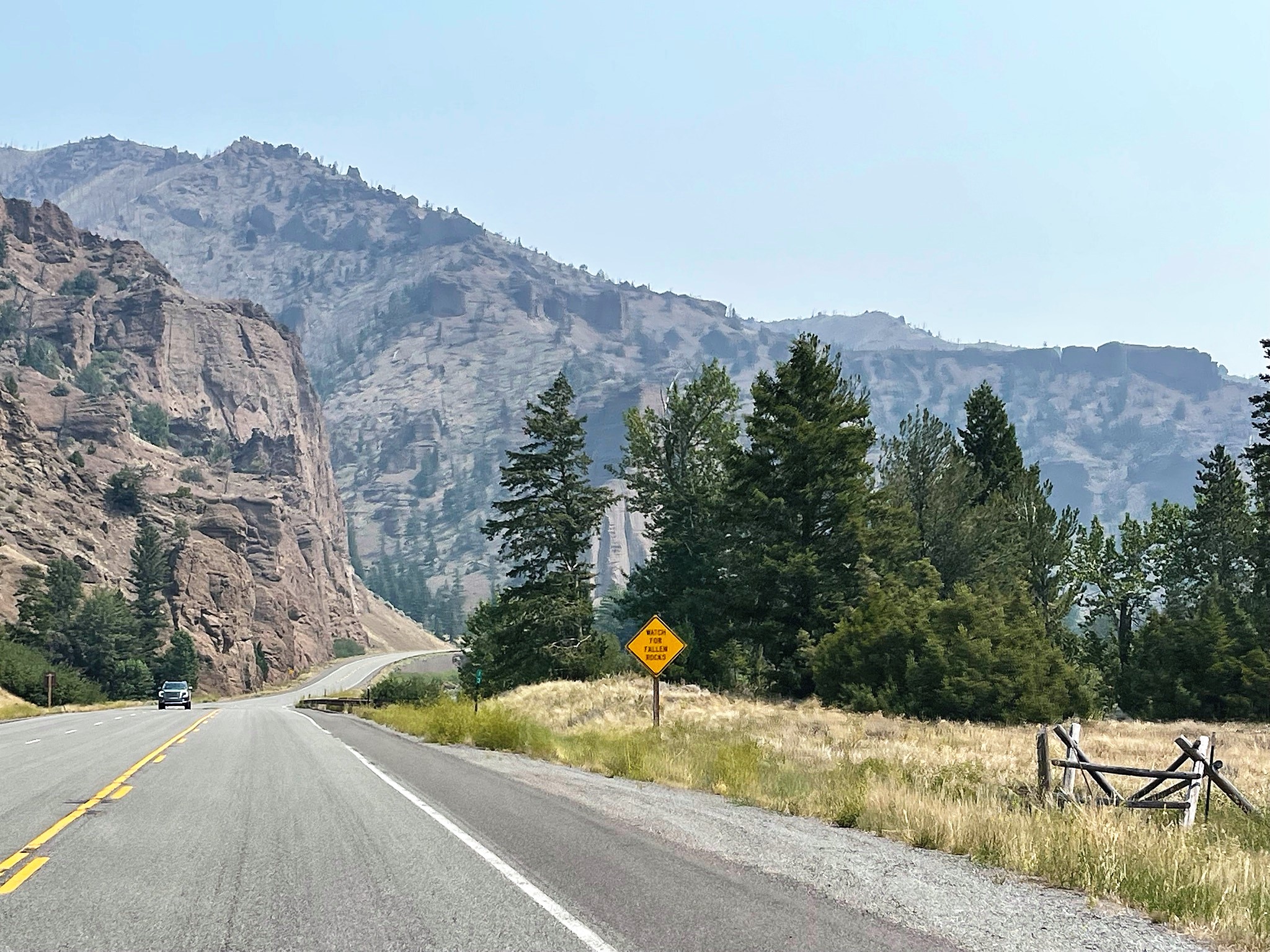 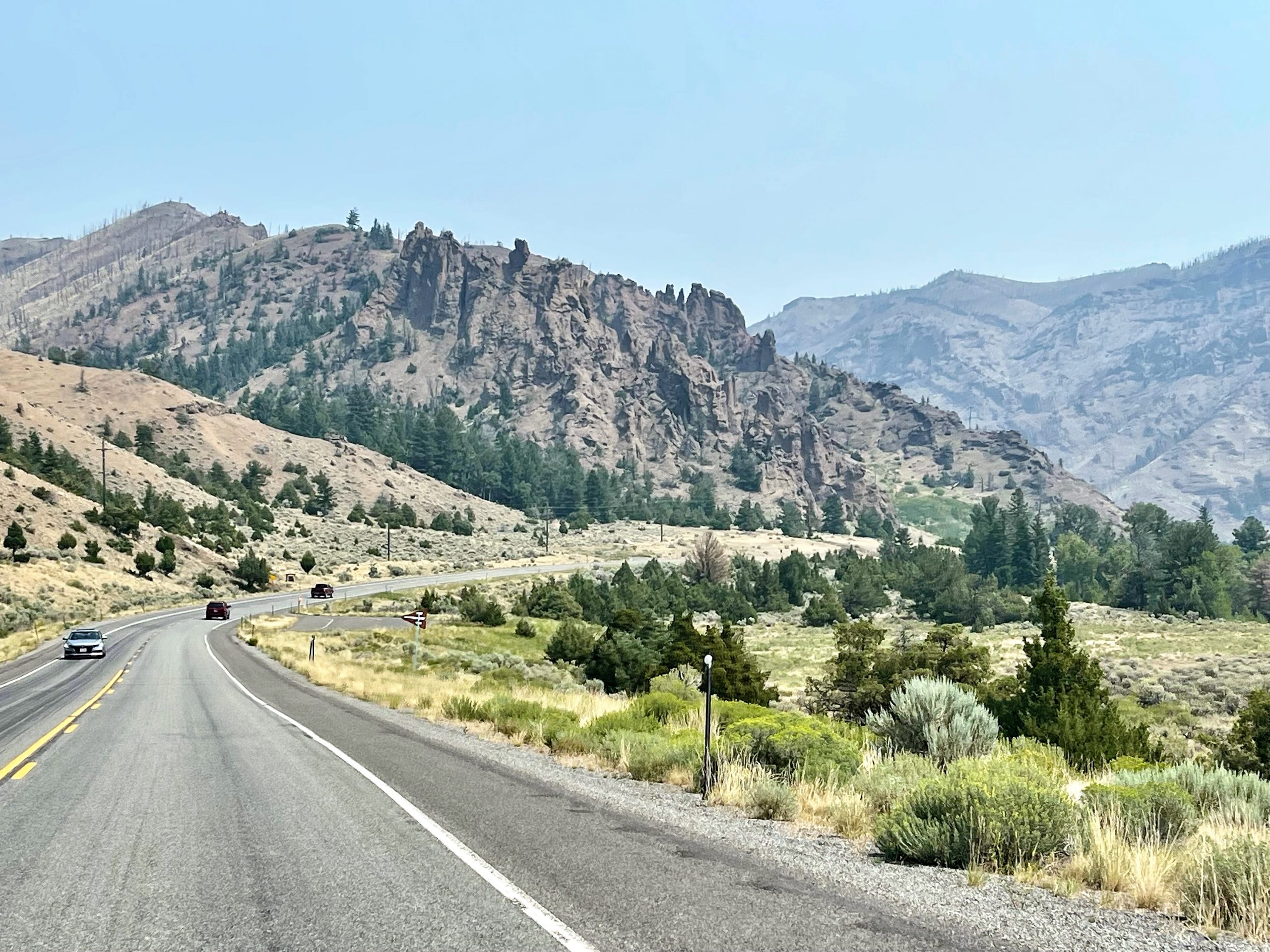 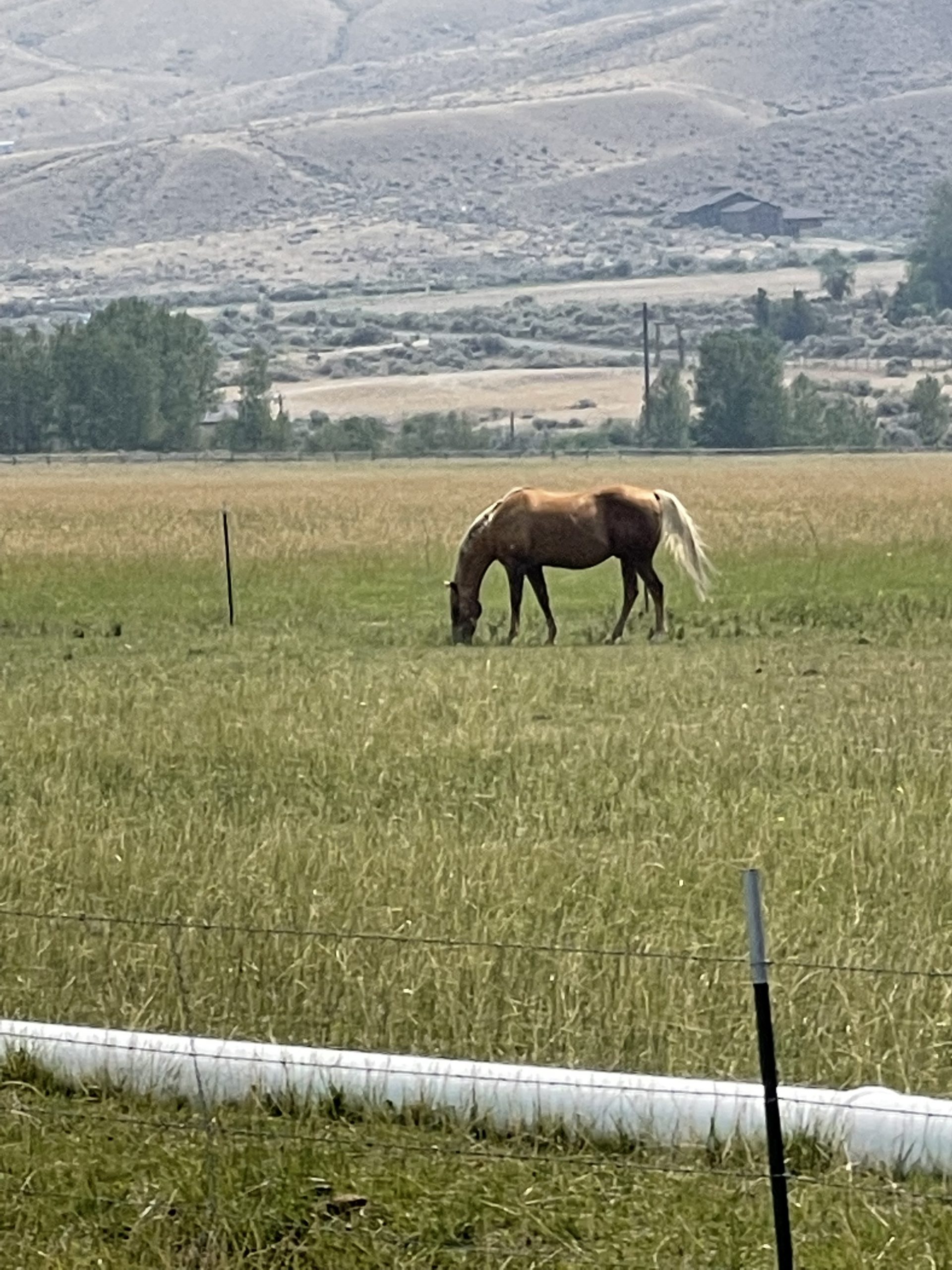 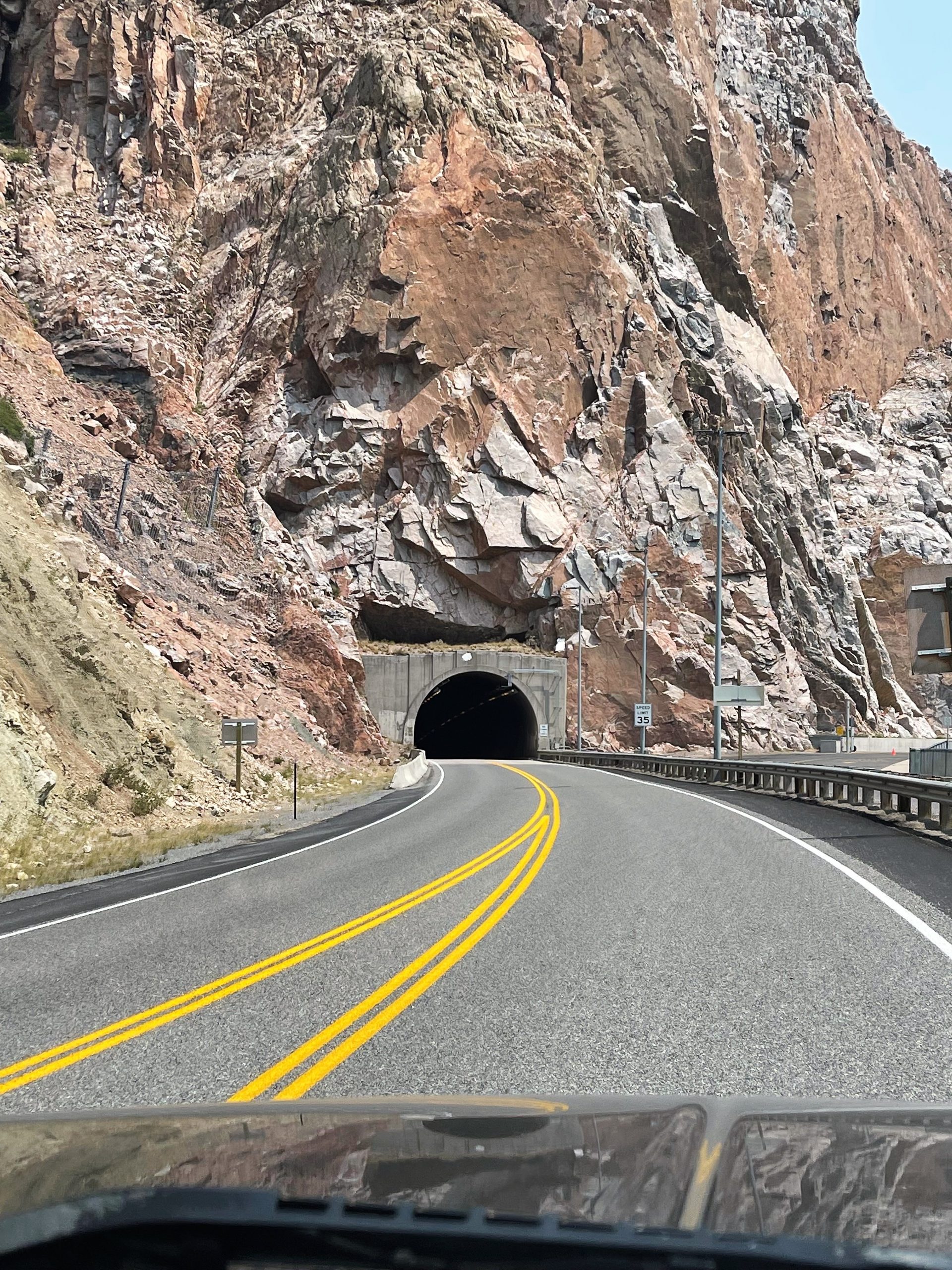 It started out beautifully. I looked ahead with anticipation: 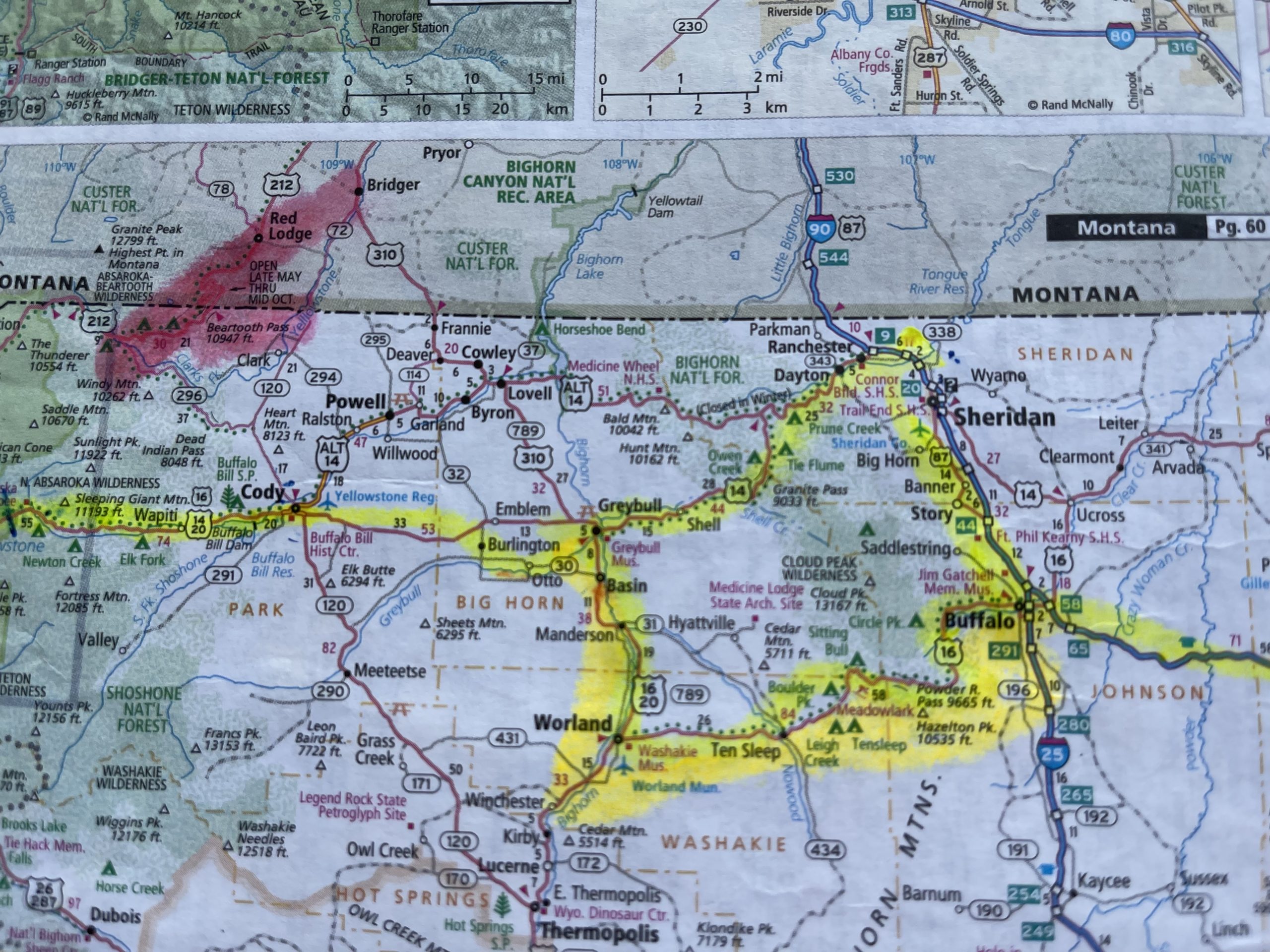 On the map, the southernmost route, known as “The Cloud Peak Skyway Scenic Byway” through the Bighorn Mountains, was dotted, indicating a scenic route. How exciting! We had read about the striking beauty of the Bighorns and now we could experience that beauty firsthand. 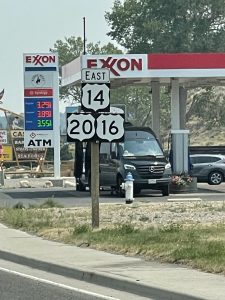 Ron filled the gas tank with fuel before we began the long route from Worland  to Buffalo. Ahead was an 80 mile stretch with no stops other than occasional pullouts or dirt roads leading to rustic campgrounds. 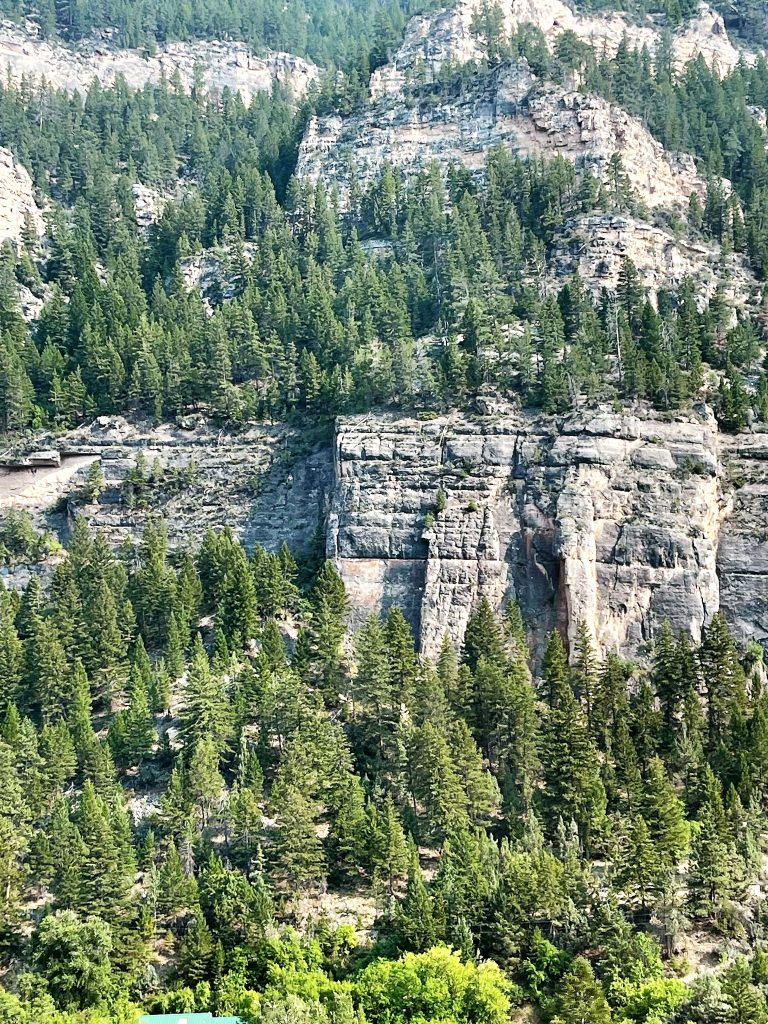 The gas tank was full. The sky was clear. We anticipated beauty. What we were not prepared for was the continual, steep ascent, continuing for miles and miles . . .

We were absorbed with the array of color in these mountains, the varied texture and geology around every curve. We looked for wildlife, especially hoping to see the namesake Bighorn Sheep or a bull elk, neither of which we had seen in its natural element yet on the trip. 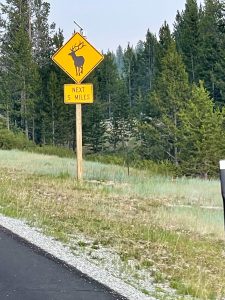 I should write, “I was absorbed with the array of color . . .” Ron, instead, was concerned about something else. As the altitude increased slowly but surely toward Powder Ridge Pass at over 9600 ft, the engine heat increased, as well, paralleling the intense heat of the day. Ron’s eyes were focused on the engine gauges rather than the breathtaking landscape. 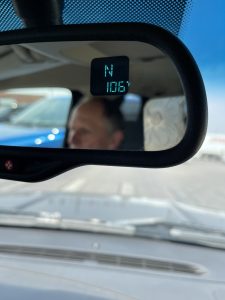 We’d been through mountains in Montana, Washington,  Oregon, and Idaho, with gradual ascents and circling descents to reach their passes, but we had not yet experienced this constant uphill battle we faced today. It resulted in many pullovers to let the engine cool. And it seemed we were pulling this travel trailer uphill continually. Mile after mile. We needed a break.

Life is sometimes like that uphill battle. We have some small episodes, which we endure and even seem to conquer. But we sometimes find ourselves in an uphill battle, in which we find no relief. We’re constantly aiming toward that pass ahead, but it seems impossible to reach. There’s no end in sight. We get discouraged.

Ron and I found ourselves in the greatest uphill battle of our lives some years ago. During that time I realized that we were not alone in the battle. I wrote about it in my book, When Life Roars, Jesus Whispers:

“None of those things mattered now. A spiritual battle was taking place. Ron and I were at war with the enemy – the thief. He was stealing and killing and destroying our family, right in front of our eyes. The Word of God is truth, and it told me about the enemy:

But while everyone was sleeping, his enemy came and sowed weeds among the wheat, and went away . . .

“An enemy did this,” he replied.

“The weeds are the sons of the evil one, and the enemy who sows them is the devil.”

“Ron and I were fighting the biggest battle of our lives in this struggle against the enemy . . .

“It was through reading the Word of God that I recognized the enemy in this battle we were fighting for our daughter and her family. Paul defined the enemy in his instructions about putting on the armor of God:

“. . . be strong in the Lord and in his mighty power. Put on the full armor of God, so that you can take your stand against the devil’s schemes. For our struggle is not against flesh and blood, but against the rulers, against the authorities, against the powers of this dark world and against the spiritual forces of evil in the heavenly realms . . . so that when the day of evil comes, you may be able to stand your ground . . .

“I think I would have rather fought flesh and blood. Instead, the devil, himself, was our enemy. The day of facing this evil had come. . .

“We were at battle, but we were not alone. We had a leader. He was fighting for us. We were just members of the army:

“It was His battle. He would fight it for us. Our orders were to put on the armor and stand firm.”

During our drive through the Bighorns, particularly on “The Cloud Peak Skyway Scenic Byway,” we pulled over many times, Ron, letting the engine cool down. Then we moved upward and onward, toward the pass where the journey would change.

Likewise, in our spiritual uphill battles, we need to “pull over,” reminding ourselves of the promises in God’s Word, strengthening ourselves in our faith of Him.

(Gain some “strengthening” tools in Shh! Listen to His Whispers! Click here to order.)

Going through the Bighorns, after we reached the pass, the downhill trek was challenging, as well. There were many sharp curves in steep downhill grades. 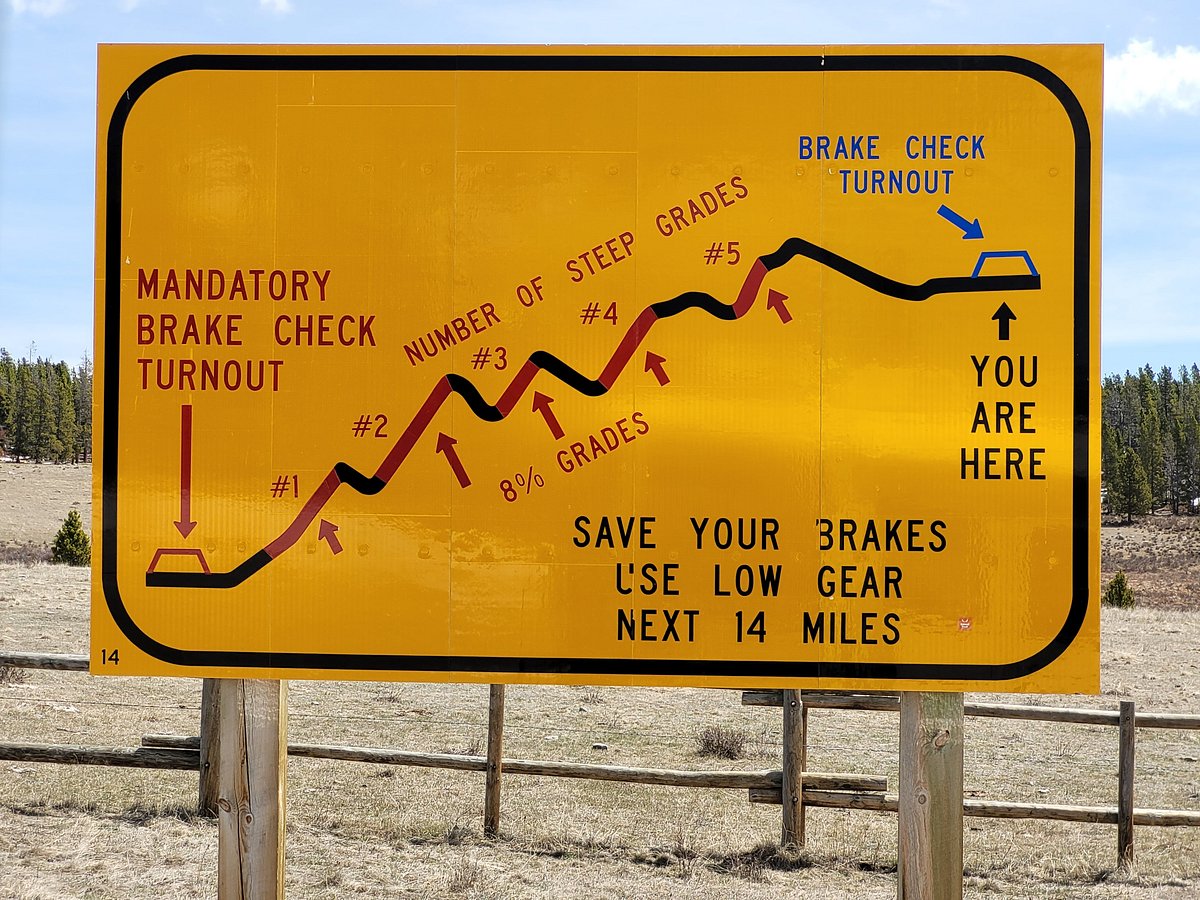 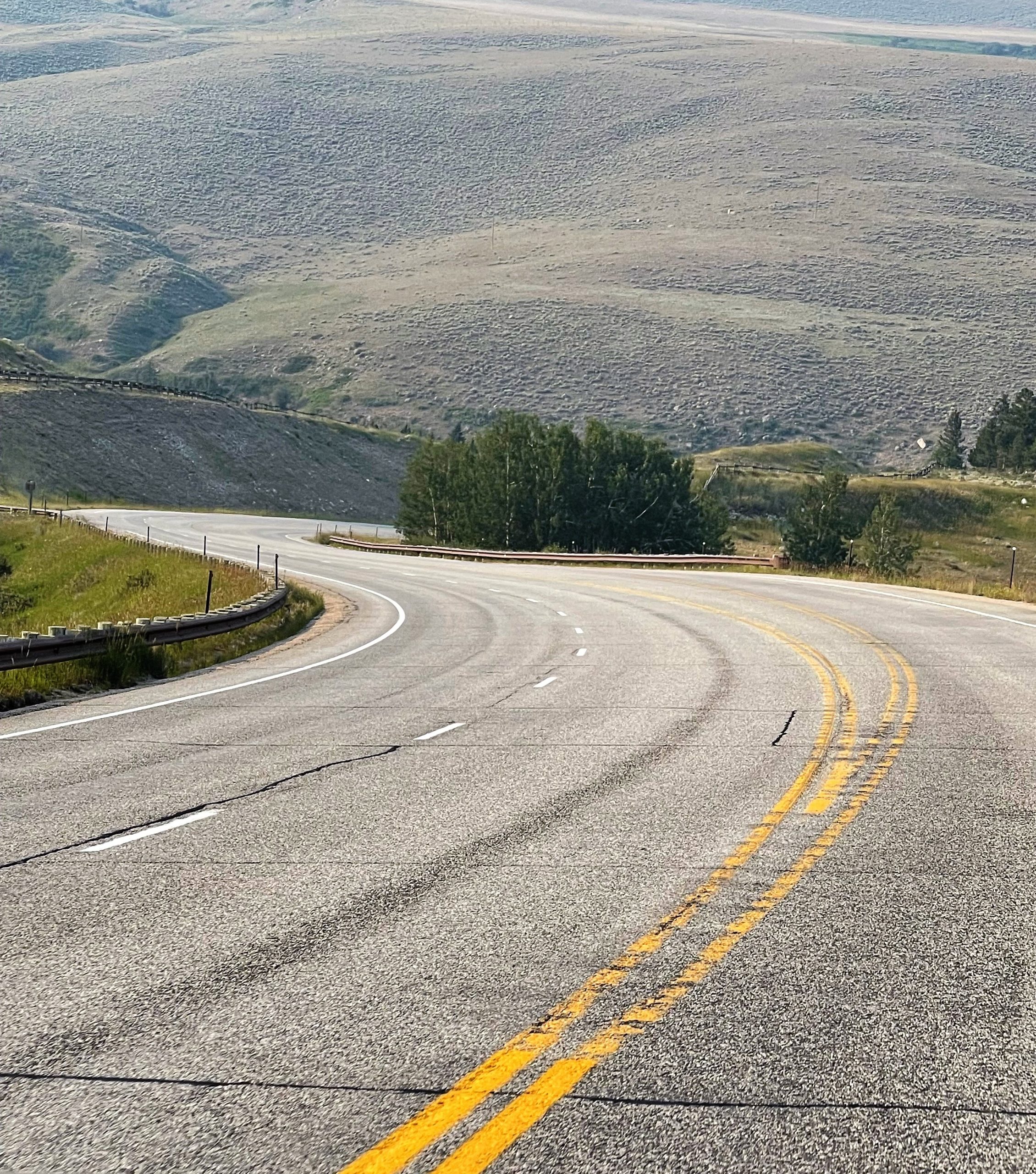 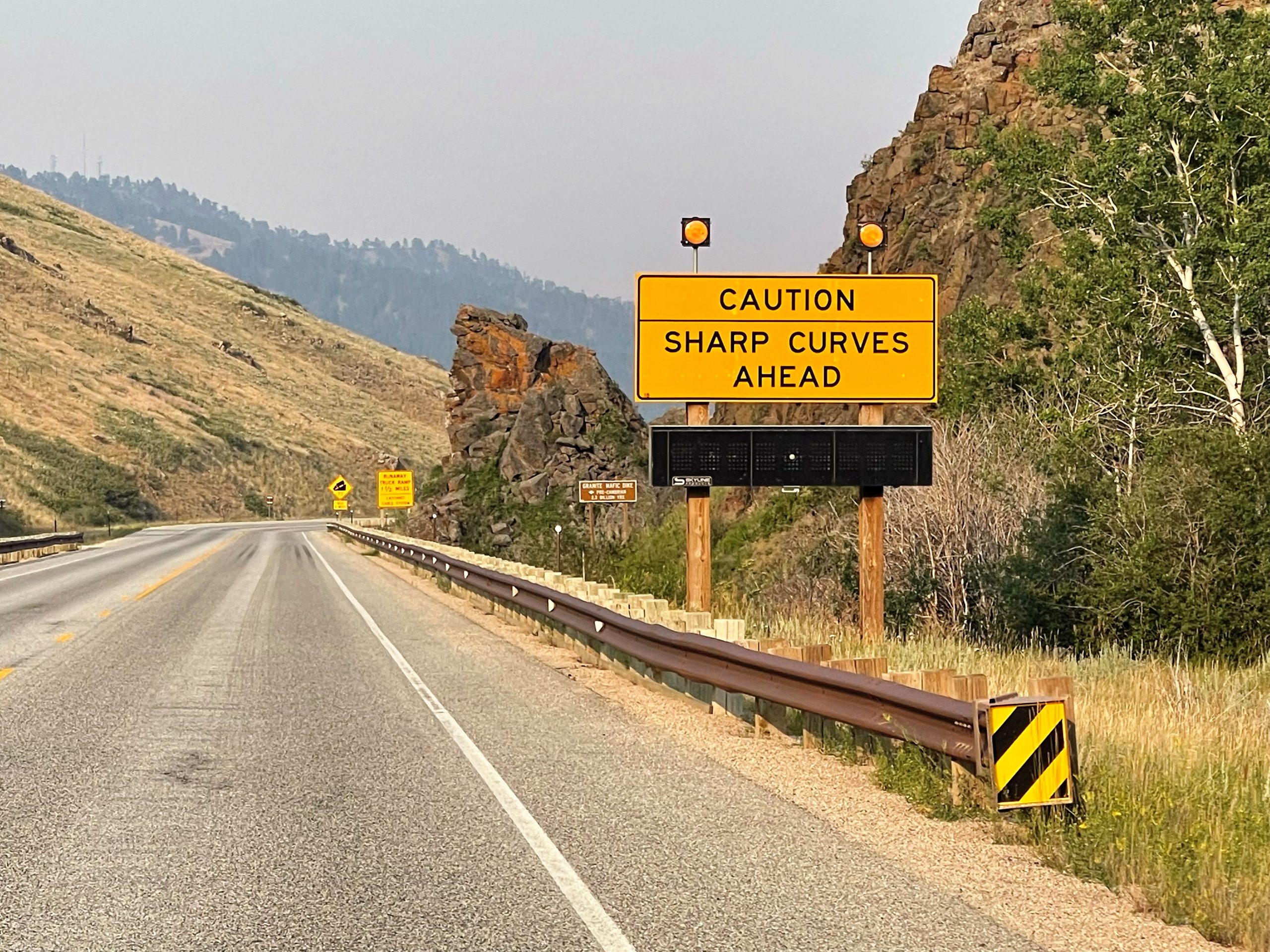 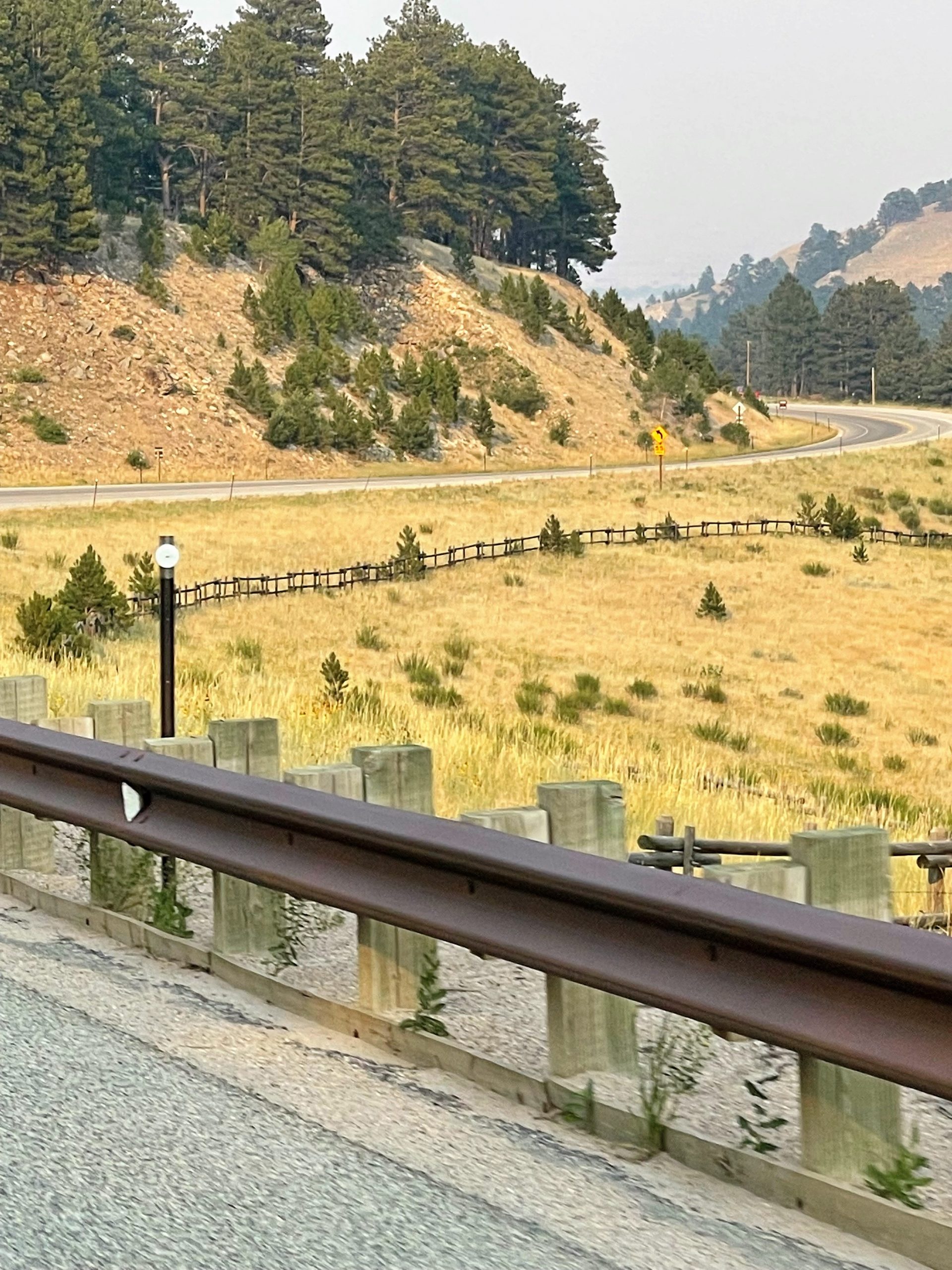 What a relief to finally and safely get to our campsite in Buffalo, at the base of that beautiful, but steep mountain.

Ron and I were never alone in that huge uphill battle we faced years ago. And you are not alone in your uphill battle, either. Be strengthened in the Lord, knowing that He goes before you and He goes behind you. He hems you in. Put on the armor of God. Don’t be discouraged. Stay in the Word. Trust in His Word.

But more importantly, fill your mind with God’s Word. Here are a few passages I’ve used in today’s article:

Click here to read the next post in our Adventure Awaits series, as we drive to Devils Tower. “Mato Tipila”

At the time Ron and I were facing that enormous uphill battle in our lives, which I wrote about in my first book, a friend sent me this video. It encouraged me, reminding me of God’s faithfulness, and strengthening my faith in the Father. I hope it strengthens you, as well:

(Scroll down and pause the music player on this page, so you can hear the song, Always.