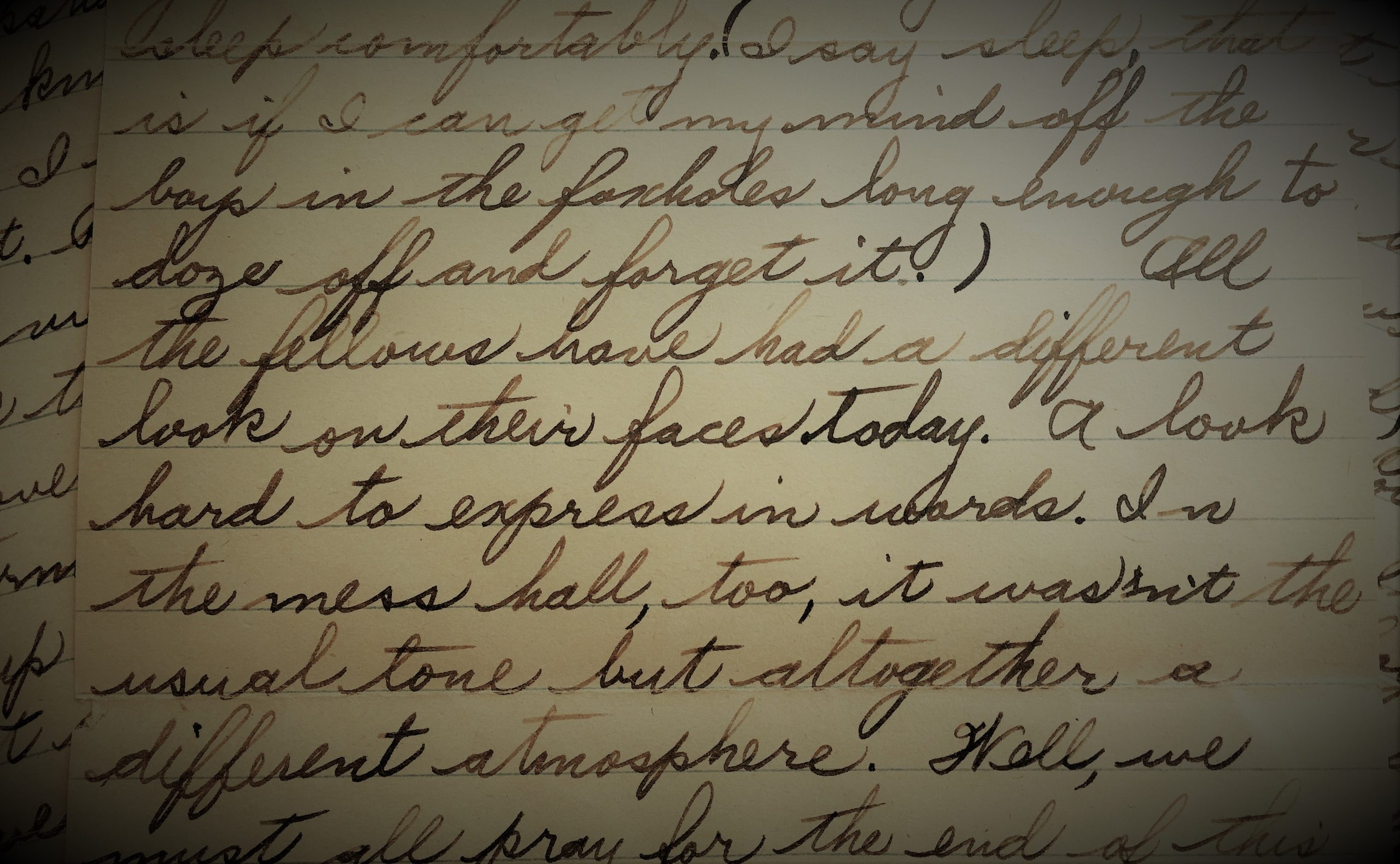 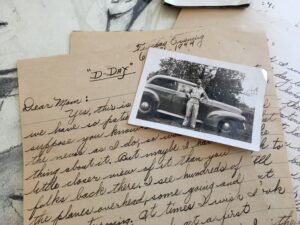 Yes, this is “D-day” the day we have so patiently waited for. I suppose you know as much about the news as I do, so won’t say anything about it. But maybe I have a little closer view of it than you folks back there. 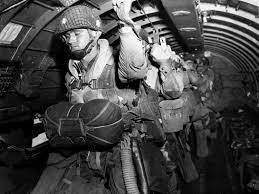 I see hundreds of the planes overhead, some going and others returning. At times I wish I could be up there and get a first hand hit at them. But guess I will have to be satisfied here on the ground and do what little I can. 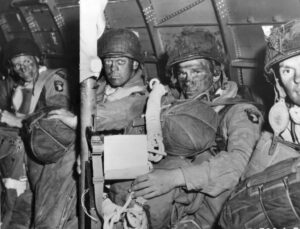 No foolin’ tho’ it does make a guy feel awful small and cheap to stand and look up at the boys flying toward danger and me be here on the ground with both feet on Mother Nature and more or less safe and not sweating out a bullet aimed your way, or an anti-aircraft gun pointed up at you. Tonite I can lay down and sleep comfortably. (I say sleep, that is if I can get my mind off the boys in the foxholes long enough to doze off and forget it.” All the fellows have had a different look on their faces today. A look hard to express in words. In the mess hall, too, it was not the usual tone but altogether a different atmosphere. Well, we must all pray for the end of this hell on earth. That’s the least we can do. “Prayer changes things.” 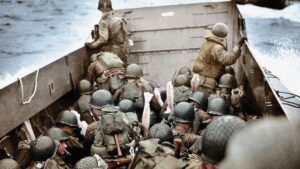 Tonite after chow, I watched a string of planes & gliders for over an hour. Just a continuous roar. It sure made me glad I wasn’t on the receiving end. All day long, almost, we could hear our bombers going over. We could see them this morning. How they glistened when the sun hit them. But later this afternoon we could hear them & wanted to see them so bad but couldn’t because of the low clouds. Just a minute ago it rained, guess that’s what was in the clouds. Hope it’s nice tomorrow so I can get up early, look up at the boys, and breathe a silent prayer and wonder if they’re ok. It is hard to decide just how I really feel today. Can’t feel happy feeling so useless, and shouldn’t exactly be sad because the days that pass will mean a day closer to the day I can come home. 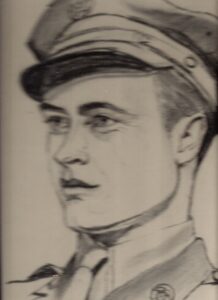 I got another package from the Service Club at Pratts. It is sure nice to get things like that. I will write and thank them for it soon.

Haven’t had any letters the last few days. Guess they are being held up. Oh, yes, I did too. I got one from Velma. She was saying how nice the neighbors are about coming to see her. But of course they all must express their feelings & poor Velma said after two or three visitors she just can’t hardly stand it any more. She said, “Bless them.” 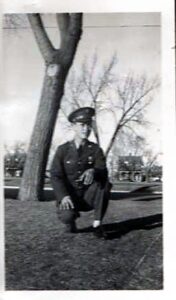 Hello Folks, it is now after three o’clock in the morning and here I am back again. Nothing has happened except that I didn’t sleep very good. Early yesterday evening before I started this letter one of the fellows and I went outside and done a little wrestling and every muscle in my body is sore this morning.  Oh well, that’s good for me.

Guess our boys are doing alright over there. Late yesterday afternoon newsmen said they had advanced as far as into town from where you are. Gee, the radio said that channel looked like one mammoth bridge. There were as many thousand big ships in it all at once as there are letters in my littlest brother’s name. And as many thousand planes as he is years old minus one. (I shouldn’t think there is anything wrong in saying this, if there is it will give the censor something to do.) Have any of my letters ever been censored?If you can make out the above figures it might seem rather strange but that’s what the radio said.

A low flying plane is going overhead now. Guess he is out scouting. They sure keep a close lookout. I bet the old Jerries are beginning to do some serious thinking. I bet they are next on the list and they probably know it.

Well, Mom, I want to write to Margie if I have time, so I better ring off for now. I’m at the same place as before so please try not to worry about me. I’ve always said I’d let you know when it was alright for you to worry and that will be when I’m in a more dangerous spot than I am now. I mean it Mom so don’t worry yet. I will write again soon. I look for a letter from you today. If so I will answer tonite. Have my laundry to wash out today. Poor me!! Give my love to all the boys & tell Dad not to worry. I love you all very much.

Par. 4: Wayne refers to neighbors who have reached out to his family, expressing their sympathy for his brother, Marion, who was killed in service in North Africa, just a year earlier.

Par. 7 Wayne uses clues to indicate distances – “into town from where you are” is the distance from Kinderhook to Coldwater;

I carefully hold the aged lined paper, worn from years of handling, first by Daddy, then by his mother,  and now years later by me, his daughter. Little did he realize his daughter would hold this letter in her hand all these years later – his mother’s lifetime passed, and his own lifetime passed. My eyes follow the longhand script of his beautiful penmanship, displayed in each letter he wrote home – to his mother – or to his sweetheart, Margie, my mother, and of which I had observed throughout his lifetime.  The papers continue to age in my own hands, as I can never get enough of reading my Daddy’s letters, as well as looking at his photos from those days he served in WWII. Each time, something different stands out to me. Today, one thing is his closing – “Your boy, Wayne” He was indeed her boy. Growing up didn’t change it. Going to war didn’t change it. My heart enters another decade, aching for my Grandma Nutt who sent five boys off to that dreadful war – and only saw four return.

Daddy was just 19 years old when he wrote this letter. As I contemplate, I discover a young man who has “grown up” quickly in the tumultuous world in which he lived. And in reading this particular letter today, I compare that dreadful time in which he was living – four years into a world war – to our present world, filled with storms, earthquakes, plagues, pandemic, riots, and political unrest. Although in a different country and in a different century, I see people who have a “different look on their faces today. A look hard to express in words. . . altogether a different atmosphere.” It is the look of today, also. The look that comes with a “different atmosphere.”

Similarly, his response to his own observations in June of 1944 could and should  be my response to those around us today:

“Well, we must all pray for the end of this hell on earth. That’s the least we can do. ‘Prayer changes things.'”

“That’s the least we can do,” as my Daddy said. 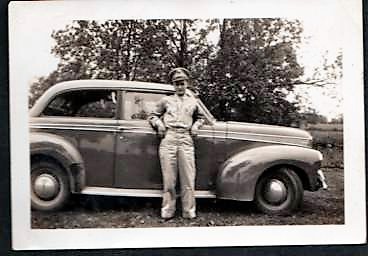