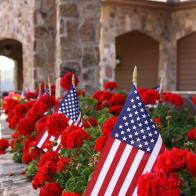 My belated response to Michelle Obama.

For as long as I can remember, I’ve always been proud of my country – America.

In my elementary classrooms, I recited the Pledge of Allegiance every day. I was a proud American way back then.

As I grew, both of my parents had opportunity to work; my dad had a steady job; my mother worked at home and sometimes outside the home. A healthy American pride was developing within me – watching my parents fulfill the American dream; owning their own home, enjoying the freedom of raising their children as they saw fit. Even in my early years, I was developing into a proud American.

As I grew up, I learned morals and values upon which our country was founded. For instance, I heard how my grandpa had once arrived home from the country store and realized the storekeeper had given him 25 cents too much in the change back from his purchase. He then “hooked” the horses back up, and drove the rig back down the dry and dusty roads to the little store to return the change. Honesty and integrity were values in my family, and I assumed them to be a part of America, and for that I was proud.

My Daddy told about serving overseas in WWII, separated from his family and my mother for four years. I learned that my grandpa and grandma had five sons serving during those four years. Only four returned. Another Uncle later served in Korea. My brother served during the Viet Nam era. Why? I learned that they all served our country so we could have the freedoms we had. I was a proud American.

Our flag hung outside our front door. It waved in the breeze during the day, but my mother took it down during the storms and at night. Why? I don’t remember anyone having to tell me why. I knew why. It was a symbol of America and of our freedom. It deserved respect. I was a proud American.

Back then, and still today, I love and worship God without fear. I know this is not possible in many countries, and because of that, I am even more proud of America.

In my country, neighbors bring food in times of death or trouble; farmers help each other with their crops; the community comes together for new projects and for those in need. America is people! I’m proud of these people – my fellow Americans; thus I’m proud of America.

At my children’s ball games, I’ve stood quietly and proudly, my hand over my heart as I’ve sung the National Anthem. I’ve taught my children to do the same. Why? Because I’m proud of America.

With three children, I was still able to go to college and attain my Bachelor’s degree – later to earn my Master’s. Never did I take it for granted. I don’t think it’s commonplace in most other countries, do you? My country gave me that opportunity, and it makes me even more proud of America.

I was born in 1951, at a time when our country was healing after WWII. It was a good time in America. And you, Mrs. Obama, were also born during a good time in America. You were born in 1964, shortly after some significant positive changes in our country’s history. Dr. Martin Luther King, Jr. had just presented one of the most inspiring speeches in history, which changed our country. Our president had endorsed Dr. King and his leadership in the Civil Rights Movement. What a marvelous America you were born into! In reading your biography, I find that you were also raised with both Dad and Mom in the house. Yours was also a close-knit family. You received opportunities to attend a school for the gifted. Awesome! Then you received degrees from Princeton and Harvard Law School. Wow! This was in America, right? And you weren’t proud of the country for the opportunity it granted you? It’s just a bit difficult for me to understand, because, you see, for as long as I can remember, I’ve always been proud of America.