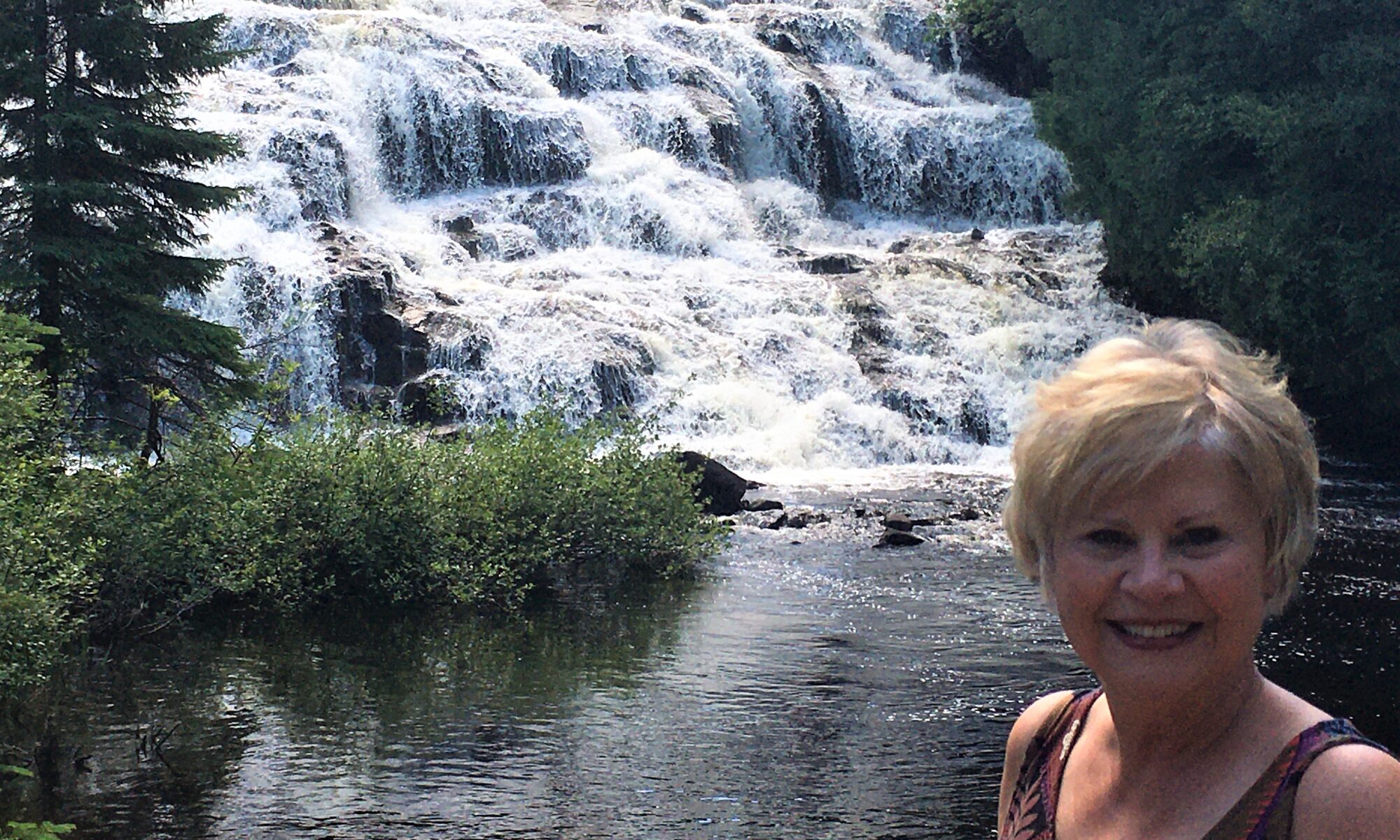 On this getaway trip, Ron had been gracious to help me revisit and recreate scenes and moments from 1955, when I had first visited these sites in the Porcupine Mountains and surrounding areas of Michigan’s Upper Peninsula with my family. On the day we packed up and hooked up our little “home away from home,” as we left the Porkies, we stopped one last time at the Welcome Center to pick up a souvenir in their gift shop. Two young women were just entering the park and happened to be coming from the two waterfalls to which we were headed: Bond Falls and Agate Falls. I showed them the photo on my phone – the one I wanted to “recreate,” taken of me at Agate Falls 65 years earlier!

“Oh,” one of the young women said, looking at my photo. “That’s not Agate Falls – it’s Bond Falls. We were just there.”

“Oh thanks!” I replied, thinking I must have marked the photo wrong.  “We need to be heading to Bond Falls.”

So we left the memorable Porcupine Mountains and headed to one of the most beautiful falls in Michigan: Bond Falls.

It was a lovely drive. The parking area was full. Even during this time of dreadful COVID, people ventured out – eager and desirous to seek beauty in nature. It took a bit of time to find area to park our vehicle and trailer, but we found shade on this hot summer day!

It was just a short distance up a trail to the waterfall, where we strove to find the location to recreate the 1955 photo my Daddy had taken of me. 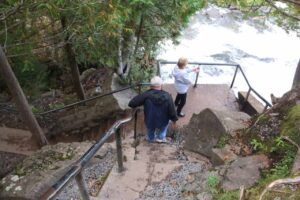 Back and forth, up and down the old cement steps along the shaded east side we hiked, stopped, and photographed. 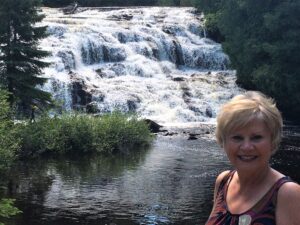 It just didn’t seem right. Had the direction of the water changed in all those years?

By this time, as you can imagine, Ron and I were just about “waterfalled out.” Bond Falls was beautiful. We had seen it, the mosquitoes were bothering us, and now we were ready to trek back to our truck and travel trailer and continue our venture. But we suddenly realized that another trail led over a footbridge and across the river to the opposite side – the west side. We brushed the mosquitoes off and followed it. On that west bank, I stepped down to the riverside and placed my feet on  (what I assumed) was the exact ground upon which I had stood as a tiny girl in 1955. The scene was recreated! (or so I thought.) I squinted my eyes a bit as I looked at Ron taking my picture – but I didn’t see Ron – I saw my Daddy.

Now, this is the actual changing point of the original article. I initially made a correlation that if we hadn’t gone over to the other side of the Bond Falls, we would have missed recreating the scene . . . and I completed the article about it. The original article was titled, “The Final Waterfall of the Trip – And I Almost Missed it!”

As I had initially written, we were “waterfalled out,” so when we left Bond Falls, we had no desire to visit nearby Agate Falls, instead driving on to L’Anse Michigan at the base of the Keweenaw Peninsula, to visit more familiar sites and recreate the last photos from so many years ago.

It wasn’t until weeks later, in making the final revisions to this article that I reviewed photos and realized my mistake: The original photo was indeed taken at Agate Falls – not Bond Falls. My childhood pic and another photo of Agate Falls reveal the obvious:

I had quickly taken the advice of a well-intentioned, kind young woman, rather than double-checking my own photos and plans. Accepted her comment instead of following my own instinct and knowledge.

I was saddened but not surprised. It wasn’t the first time I had practiced poor judgment – was unwise in my decisions! And of course, it brought about regrets. Once again on this “… Getaway – Seeking Sounds of Silence, the Secret Place, and Wisdom,”   I had learned a lesson about wisdom in a most unexpected manner.

Proverbs speaks much about wisdom:

He who walks with the wise grows wise. (obviously the young women weren’t wise regarding waterfalls)

. . . and perhaps most important or applicable to my situation – in Corinthians:

my faith must not rest upon the wisdom of others, but upon God’s power. . .

Of course the lesson is much greater than finding the correct location – the correct waterfall. It’s in finding God’s will – following God’s plan instead of following people. People will never have the answers for me, but God will. He will lead me, if/when I seek Him. And I can always seek Him in prayer and through His Word.

The good news for me regarding Agate Falls is that there’s a possibility that Ron and I will be in the area again next summer. As we walk the path to the falls and hear the rush of water, my eyes will feel a bit of rush, as well, and a mist will roll down my cheeks. Ron will hold the camera. I’ll step close to the water’s edge with the beautiful falls in the background, and squint a bit, looking in Ron’s eyes, but seeing my Daddy holding his Kodak 35 mm.

If you haven’t yet subscribed to receive my article postings by email, please click here to do so.

And, thank you for reading my writing!