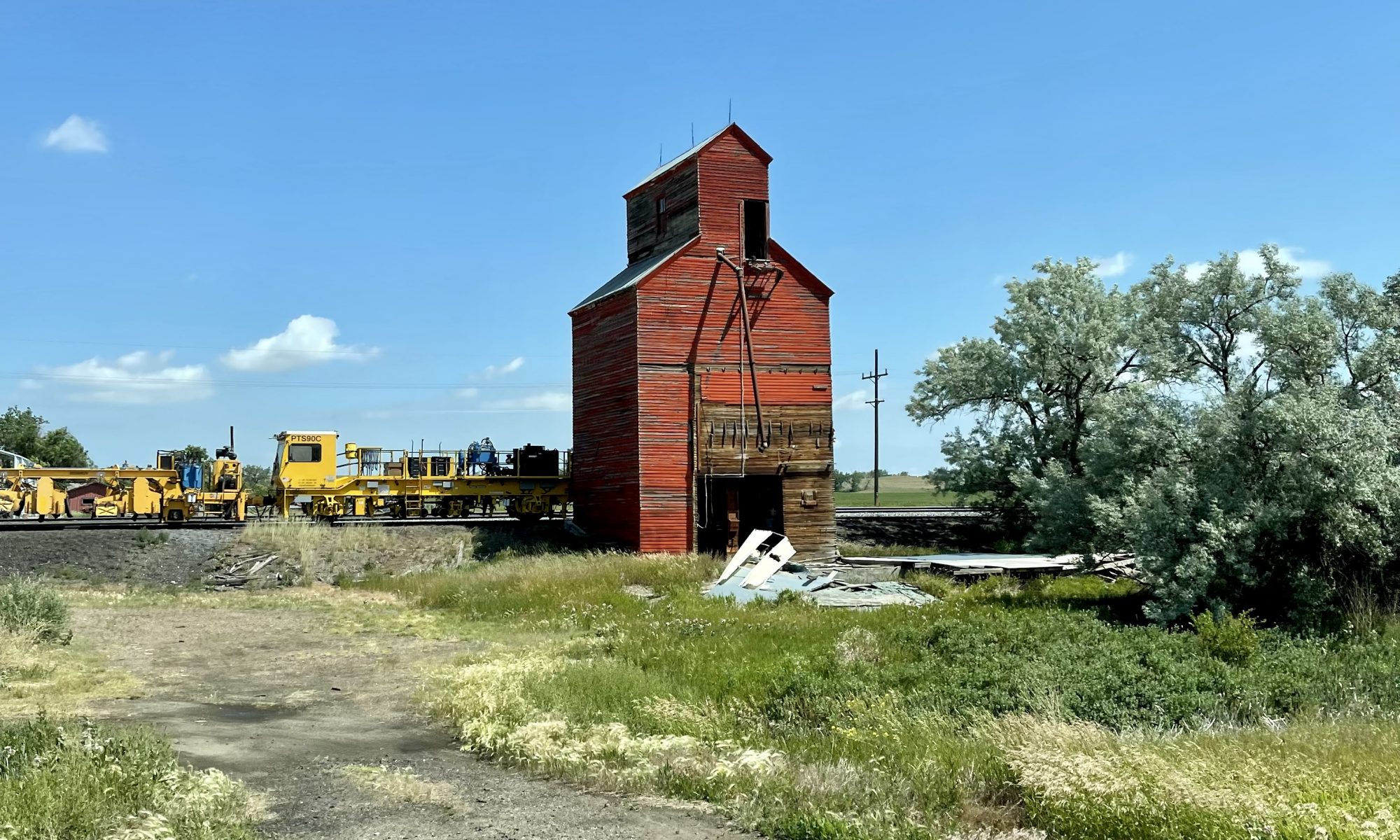 When one tugs at a single thing in nature, he finds it attached to the rest of the world. ~ John Muir

There seemed no better way to celebrate our freedom in this country than to do just what we were doing – driving wherever we wanted! And we did just that.

As we drove across this little portion of America, we rejoiced with all the people we observed heading to worship together – the first and primary reason our forefathers came to this country. We smiled as we drove past people picnicking and swimming and celebrating their small town festivals. 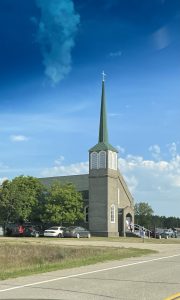 It was a typical Fourth of July in America but one I think in which people celebrated bigger than ever this year because of the distress of the previous.

Northwestern Minnesota looks much like the northern part of our (Michigan’s) Lower Peninsula. Beautiful. No farms other than hay. Hay for the cattle – both red and black angus here and continuing into North Dakota. 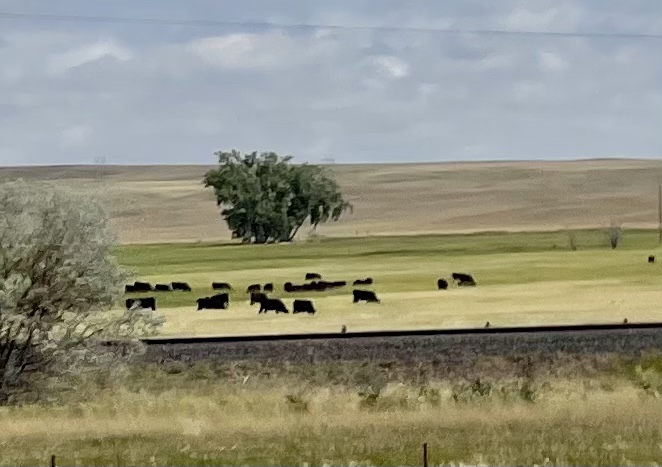 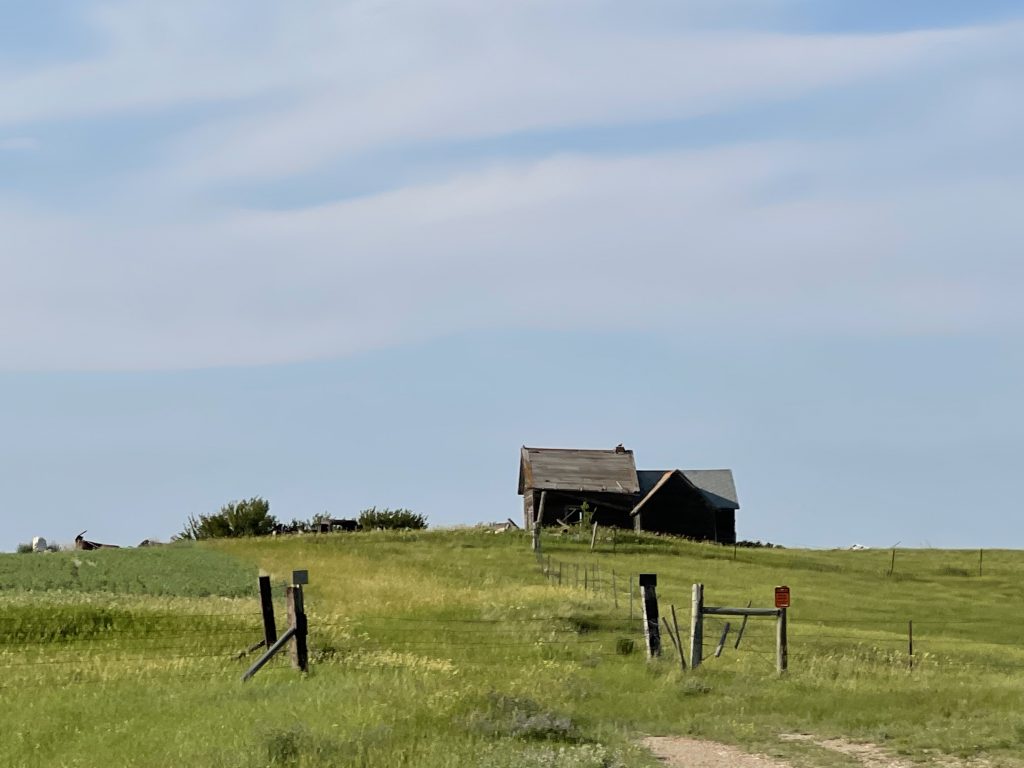 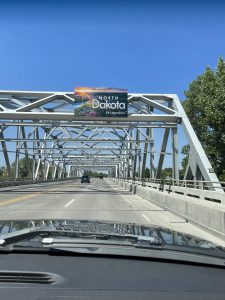 Shortly, we entered North Dakota, through which we would travel its full distance today to set up camp at a state park near Williston, its westernmost state park before crossing the Montana line. Before our trip began, a fellow RV traveler had advised us not to take Highway 2 through Minnesota and North Dakota – said the land was desolate and didn’t offer any striking views – was boring. But we drove it, anyway, and heard its voice throughout the day. The land itself spoke to us of times past, of hard work, and of perseverance. 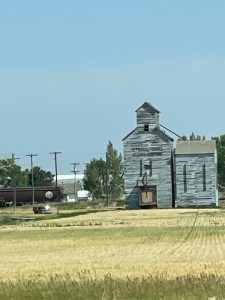 We  listened.  And because we listened, we also learned. What better day to see this land and hear its stories than the Fourth of July! We were united with the people who lived here – both past and present, and now we had some of their stories to share. 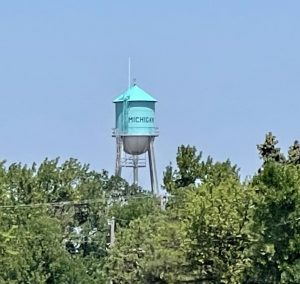 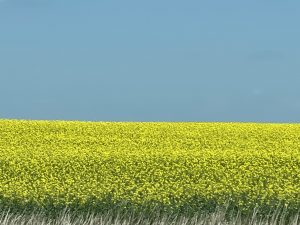 At first, like Minnesota, North Dakota had only fields of hay and cattle grazing throughout pastures near and distant, but further west, the landscape changed. Buttes, lined both the north and south horizons, brushing our trail throughout northwestern North Dakota, still interspersed with grazing cattle but now primarily covered with bright yellow fields of canola. Miles and miles of it – as far as the eye could see, spreading out to the Buttes. , Unlike the native grasses upon which the cattle grazed, the canola was a more recent commodity, and similarly, another commodity,  foreigners in every sense of the word now sprinkled the landscape: oil wells! They were alien-looking structures, metallic and noisy, some large, some small, some with nearby flames on towering pedestals, as though to make a statement of their stature or worth. All in all, they were noticeably odd and contrary to the originality of these Northern Plains. All were surrounded with adjacent storage tanks and gravel trails for the tankers to haul the “harvest” of these fields. It was an unfamiliar sight to us, but commonplace to these parts. Rough, beaten down side roads evidenced the constant wear of oil tankers. 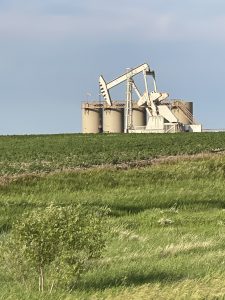 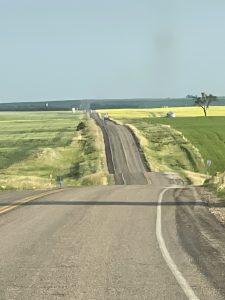 At the end of our long day of driving, the familiar voice of our “lady gps” directed us to turn south from Hwy 2 onto a 16-mile road, toward our destination of Lewis & Clark State Park on Lake Sacakawea. A large semi passed us, stirring up dust on this trodden gravel road. We looked ahead, realizing the entire 16 mile route would be rough, like a washboard, dusty, and battered! Ron’s frustration, which had immediately  reached a boiling point, diminished as we crept along and looked ahead. Soon, we looked down upon the beautiful setting of the park. Towering buttes and rolling hills provided the background for this picturesque setting we drove into – our little piece of North Dakota for the next two nights. 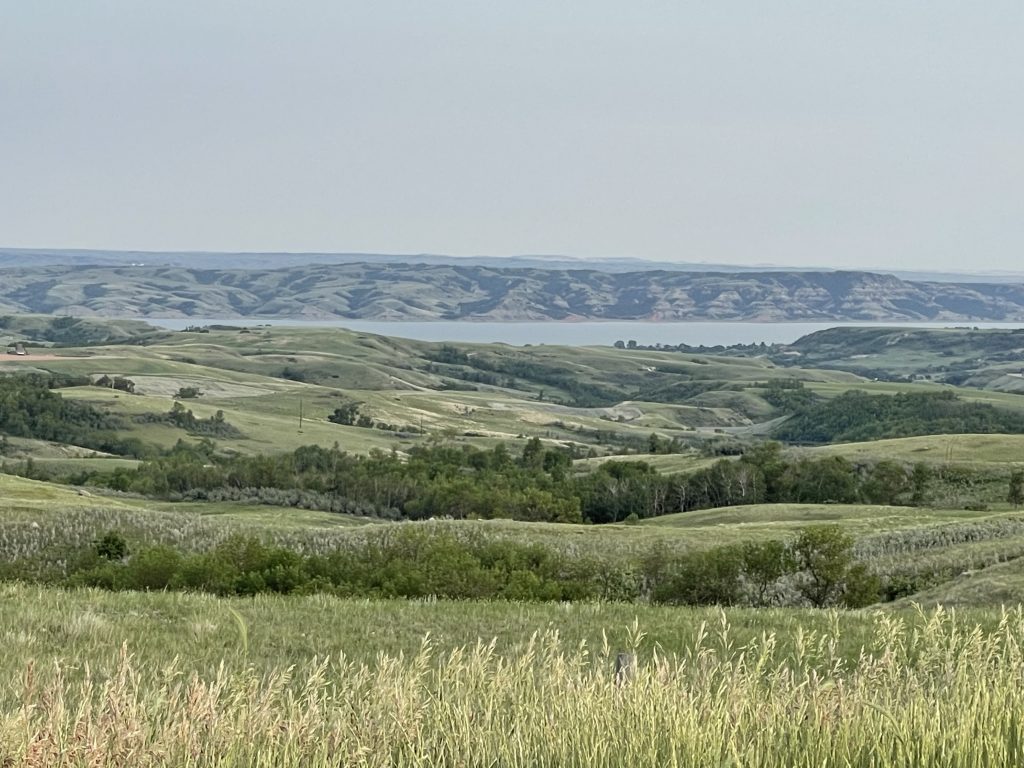 Of course, this park differed from any other we’d been in, but that was good. Today,  in quiet observation and in listening to the voices, we had recognized the value of diversity, if only in landscape and climate. It was a valuable lesson.  From our campsite, we looked at oil wells up in the Buttes, a distance away, their flames visible to us all through the night. 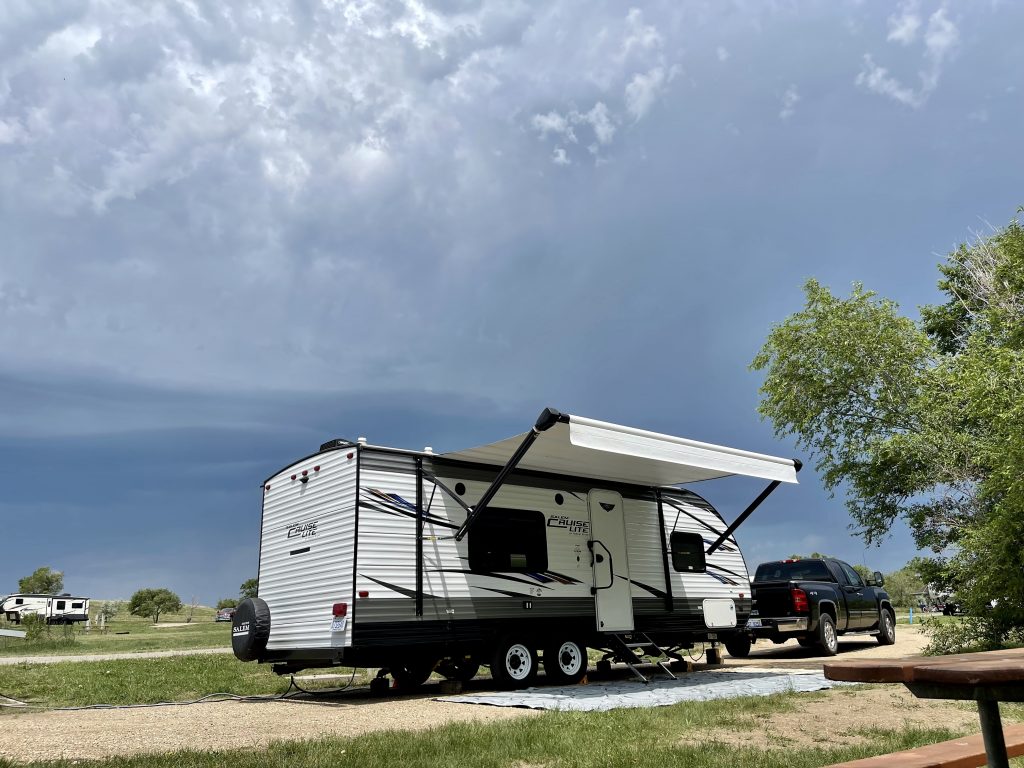 You can view all past posts on this website from the “Home Sweet Home” page!