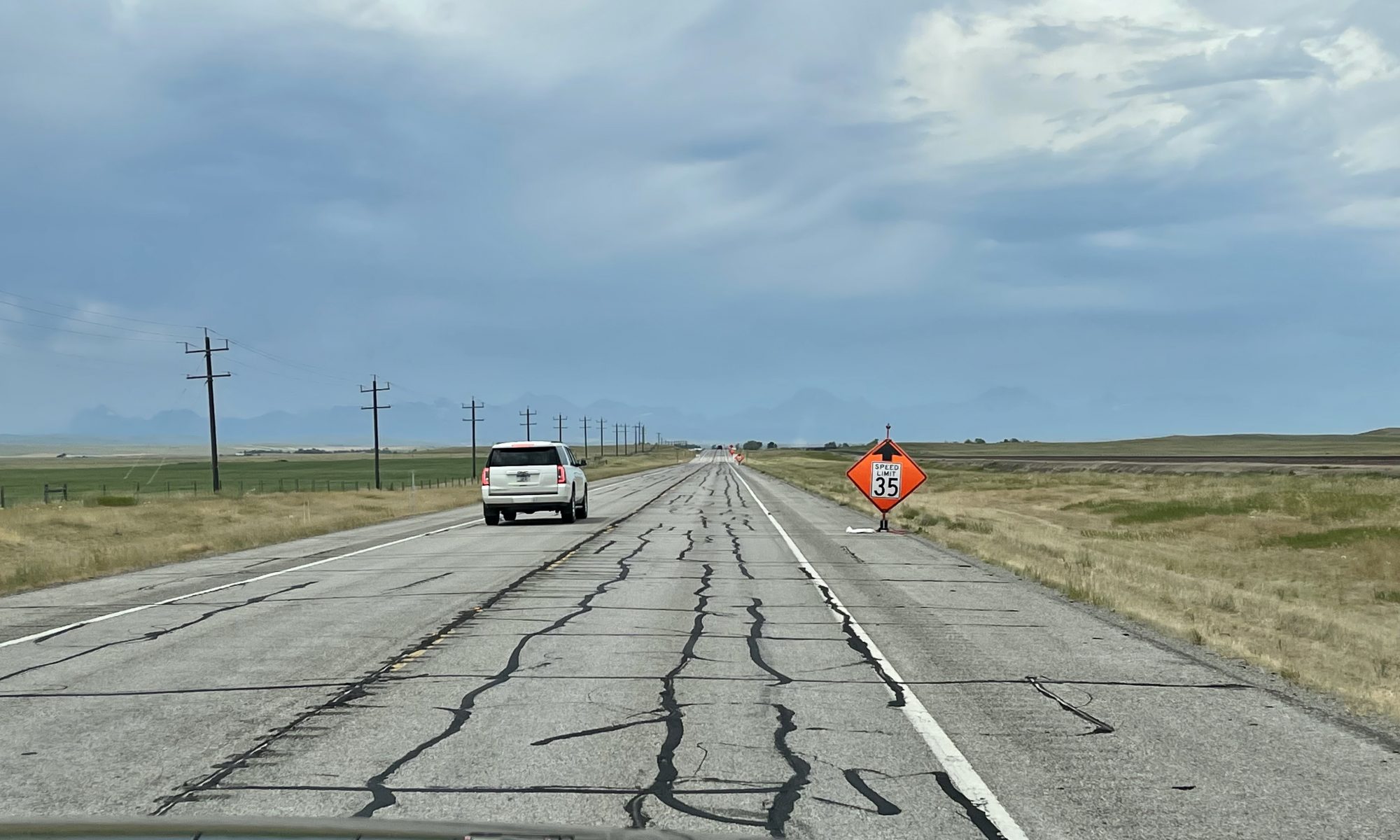 The mountains are calling and I must go.

Last night had been one of those nights that when traveling RV, you sometimes plan – or they sometimes just suddenly occur – where you must sleep somewhere other than a designated campsite. If you read yesterday’s post, you know that we suddenly uprooted ourselves from Lewis & Clark State Park in North Dakota and headed west into Montana early in the evening. I looked at the map, of course, and searched my Map app, but the Montana map doesn’t identify Rest Areas quite like our Michigan map does. So, after driving a distance, and uncertain how far the next Rest Area might be, we pulled over to one in Culbertson, Montana, a quiet burg, and yes, there was a train track running behind it! Trains are everywhere in our travels! (See my post, My Pink Earplugs)

Nonetheless, we drove around the small parking area a couple of times to find the most level ground, had our supper, and settled in. It had been hot that day – the day we left Lewis & Clark State Park and had our window replaced in Williston. Very hot. And we were concerned about sleeping in the heat through the night, but these are the times one is thankful for the constant wind of the Northern Plains. In the quiet of the evening, a car occasionally pulled into the rest stop. One semi was parked a short distance away, and an old man slowly got out of a white pickup by the restrooms. I watched as he hobbled, bent and slow going, emptying trash bins, going in and out of the restrooms, and packing the huge black garbage bags into the bed of his pickup truck. Again, I made assumptions as I observed. Most likely, his social security was  not enough to live on. He either needed the county or state job to make ends meet, or he wanted the job – just to keep those legs and arms nimble. I observed stamina, although I could not truly see the expression on his face. He was a hard-working American, I knew that.

We had entered a different time zone again, and although it was about 10 pm there, it felt like Michigan’s 8 pm to us. Wind whipped our little trailer. I assumed it would simply “rock me to sleep,” and it did, but when I awoke later, the strong wind had decreased, the trailer was still. The pleasant, almost cool, dry breeze passed between the open windows on each side of our bed, and it was refreshing. 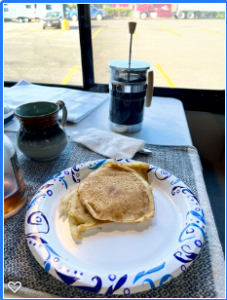 When we’re without electricity, I heat water on the gas stove, and Ron makes French Press for us, so our morning routine continues!  We were on the road at 7:30, and it was pleasant driving at 65°. We soon realized why Montana is called Big Sky.  Oh yes, it is. One Big Sky from north to south and from east to west. Small towns dotted the otherwise desolate highway, and each had at least one junkyard. Not only were junkyards found in the stops along the way but also in wayside fields. Cars, tractors, farm machinery – rusting and surrounded with weeds. Run-down homesteads – mostly trailers. Those who lived along this stretch of Highway 2 were not the farmers.

The farms were set back – on side roads that seemed unconnected to Highway 2. 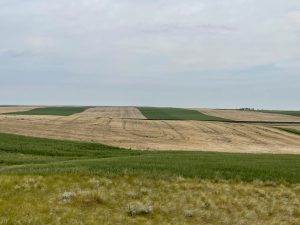 Farmers raised one crop: wheat. Both spring and winter wheat were mixed in the fields. It was a whisker wheat, Ron said.

Railroad tracks ran parallel to Highway 2 much of the way. These trains were often pulling oil tankers.

The Buttes still lined the north and south horizons, but now, they also lined the west – where I was gazing, all throughout the morning, anxious for my first look of the mountains.  The day was overcast. The west horizon was hazy. Finally, it came. Not the buttes, nor plateaus, but the mountains! And we saw them beyond a run-down homestead. 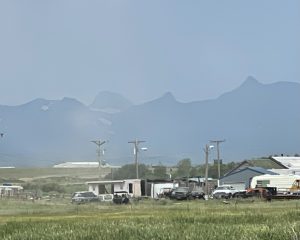 But hey, they had a beautiful view of the mountains! America is a land of opportunity!

We entered the small town of Browning. It was not what I expected. Galvanized sided buildings were damaged from neglect. This city on the east side of the beautiful mountain range should be thriving, but it didn’t seem to be. Only the cultural center was beautiful. I saw many first nation people. I felt badly that they live in a broken down atmosphere, one in which their ancestors had flourished. 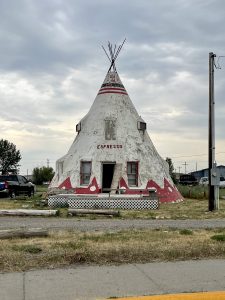 We entered the southern border of the park on Highway 2 through East Glacier. 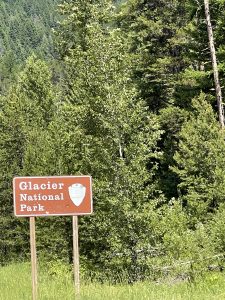 It was beautiful – even on this overcast day.

If the mountains outside this park are this magnificent, we could only imagine what lay ahead for us tomorrow, when we would enter the park and drive its steeps, its passes, and down into its valleys. 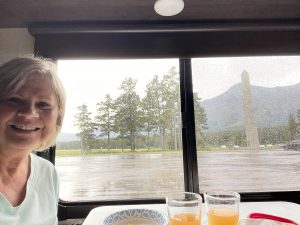 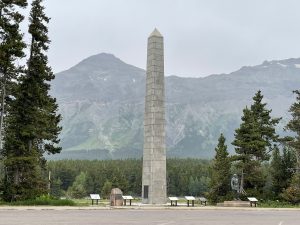 We stopped for lunch at a wayside monument at Marias Pass. The tall cement monument had been built to honor Teddy Roosevelt, but the bronze statue was the key point of this wayside. It was to honor a man named John F. Stevens who had surveyed this land for a railroad, far before any highway crossed it. Interesting indeed, and Ron and I were reminded of all those who came before us in this great land and the tremendous work they completed.

Now, it might just seem a little thing to you, but . . . We stepped into our little trailer to have lunch, and while we ate, it rained. Cars pulled in to the wayside. People stepped out, in the rain, covered with hoodies or ponchos – or not. They read the 4 placards placed at the sight, and they moved on. As a tourist, you tour – rain or shine! But when we finished our lunch and went across the parking lot to read the tributes and observe the train tracks, the rain had stopped. It was just another tidbit of confirmation that we were right where and when God wanted us to be. 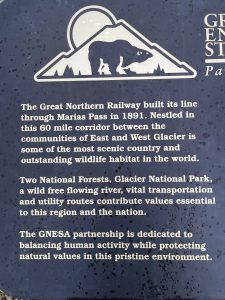 Of course, one or two trains passed while we were there! Trains are everywhere in this part of the country!

4 Replies to “#8 Trains are Everywhere!”