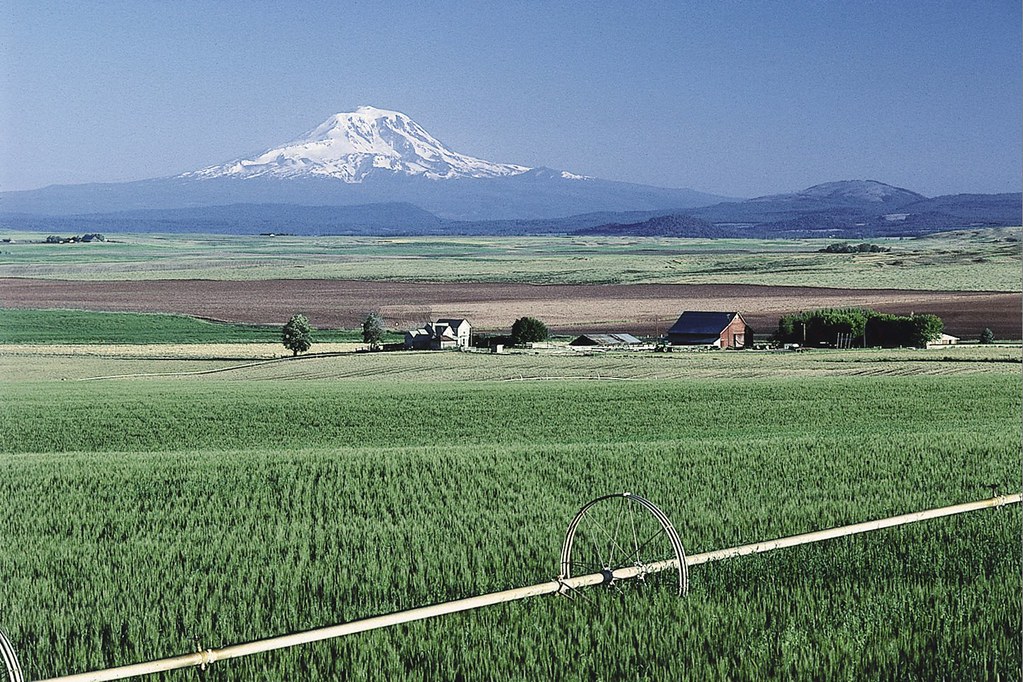 Oh my word – Mt. Rainier was beautiful to view much of the way from Yakima, Washington, south to the Columbia River Gorge. 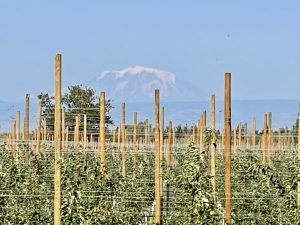 First, Rainier was the backdrop of acres of fruit. How appropriate, for as we traveled, we munched on deep red sweet cherries from the area. Never so fresh! 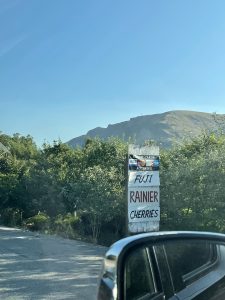 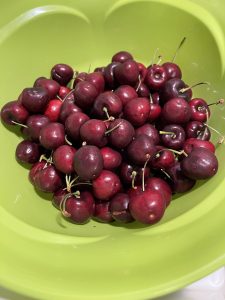 Then Rainier stood white-capped and massive behind green fields of hay; farmers were cutting and raking as we drove on. 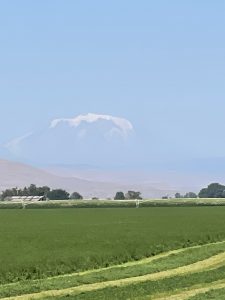 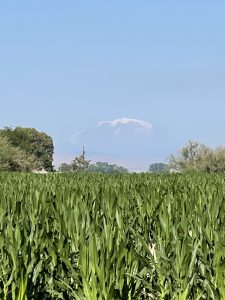 Soon we discovered corn fields, which we hadn’t seen this far west since Minnesota.

At a later point, we viewed both Mts. Adams and Rainier at the same time. How very beautiful! Their peaks were covered in snow, and it was somehow physically refreshing to look westward toward them, as this day was extremely hot and dry. 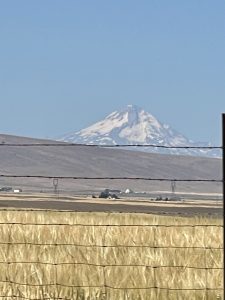 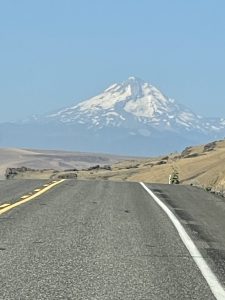 Eventually, most of the green farmland gave way to hot, dry field and rolling hills,  colorless other than a few small trees that can root in the rock. 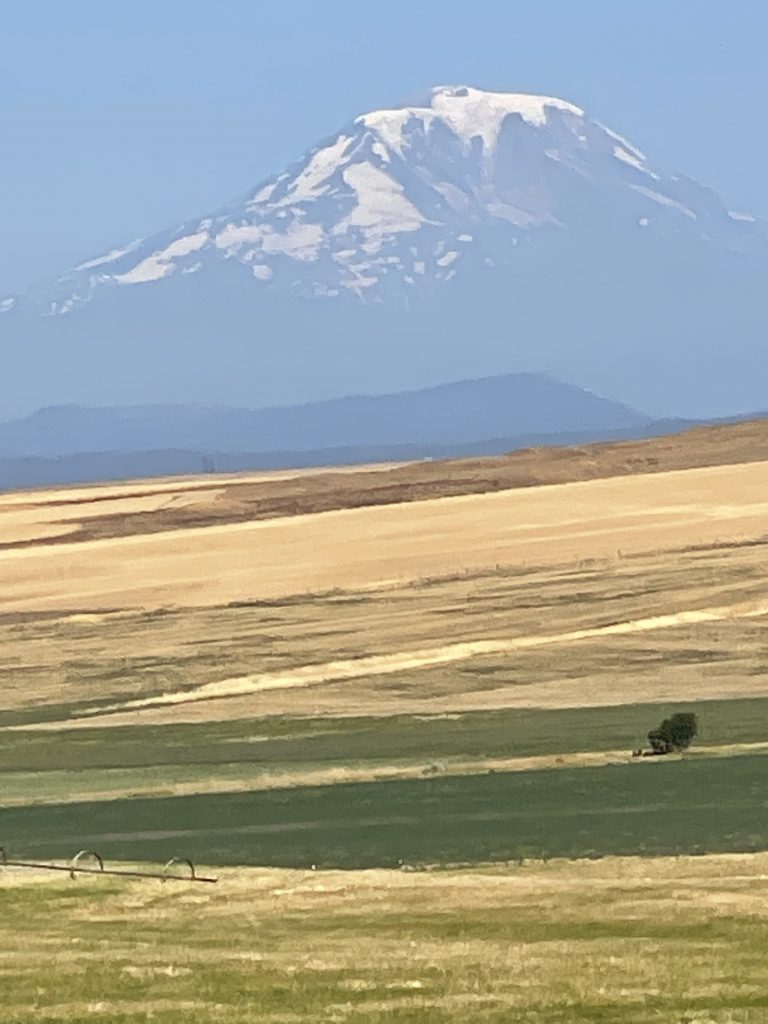 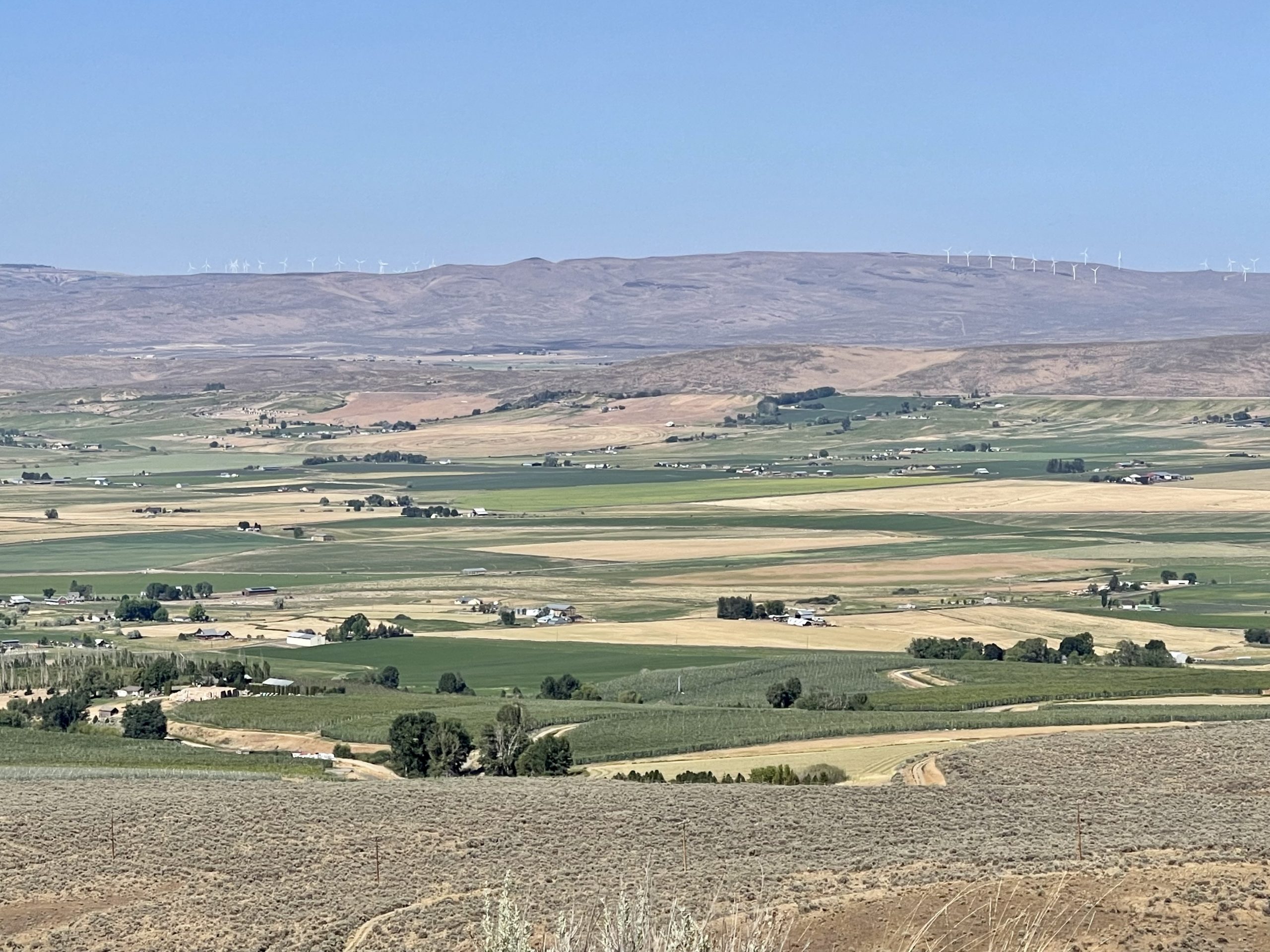 We stopped high upon a butte to look out over the valley below. Unlike the Wenatchee Valley, this valley was hot and dry and brown, yet it was beautiful. Green fields evidenced ingenuity of the farmers in the area.  It was not my favorite kind of landscape or climate, yet I loved it for God’s people were in the land and worked the land. This land had resources and purpose, just as all His creation does. 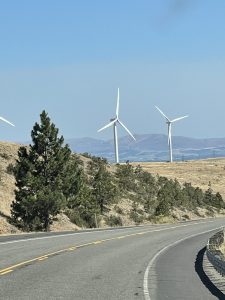 Soon we saw an unwelcomed site in this wind-whipped land: smoke. As we neared, we saw the blackened buttes to the east and helicopters dropping bags of water upon the earth below: 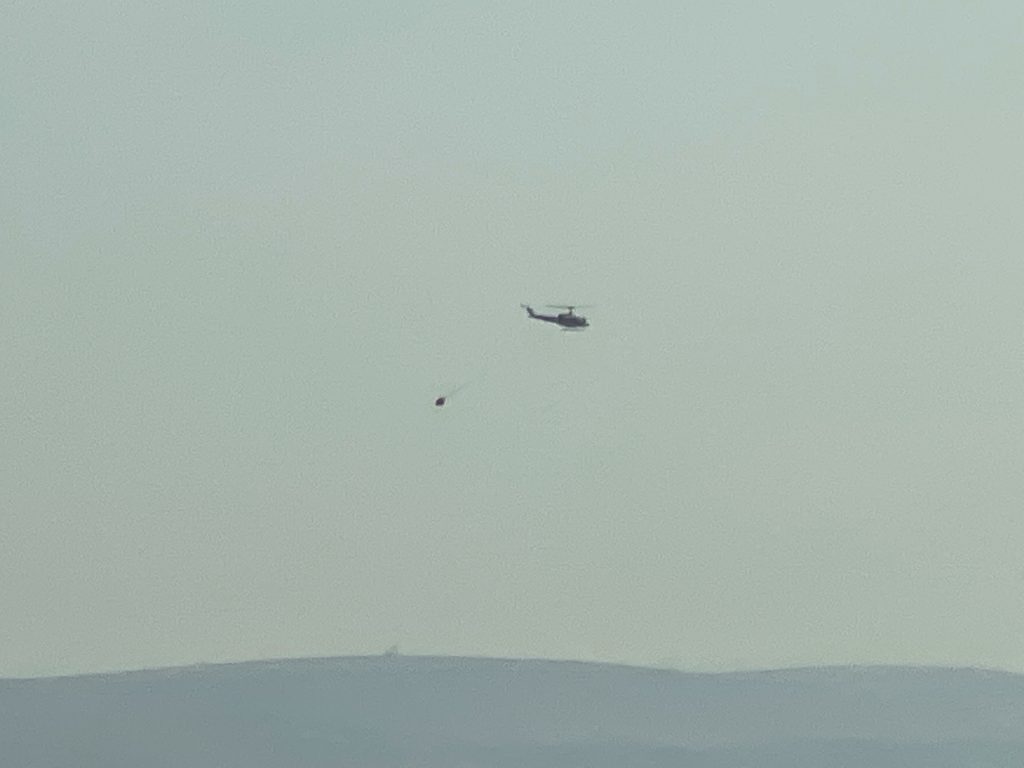 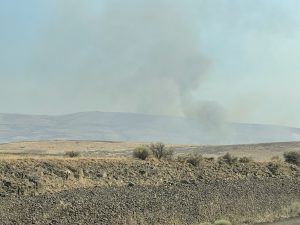 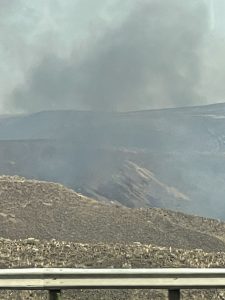 We drove past the smoke today, but in days to come smoke from fires such as this would fill the skies around us and traces would penetrate our lungs, as well. 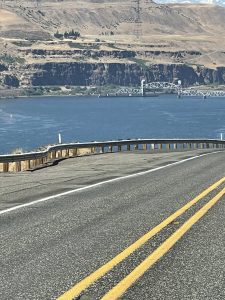 Finally the blue water and green steeps around the Columbia River Gorge came into view. 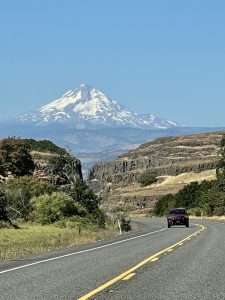 It was a welcomed sight. 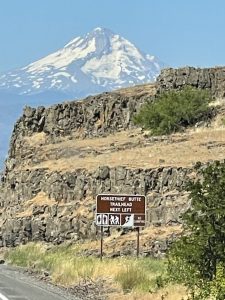 We followed the river westward on the Washington side, high upon the edge of the buttes for miles and miles before we descended and crossed the bridge near Hood River. 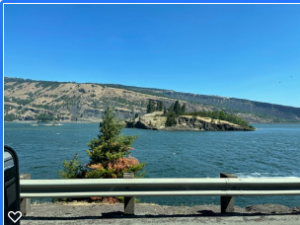 We said goodbye to Washington and hello to Oregon. It seemed a different land – green and cool. But it was still windy  – very windy!

The next days in the Columbia River Gorge were refreshing – like living in a magical land! 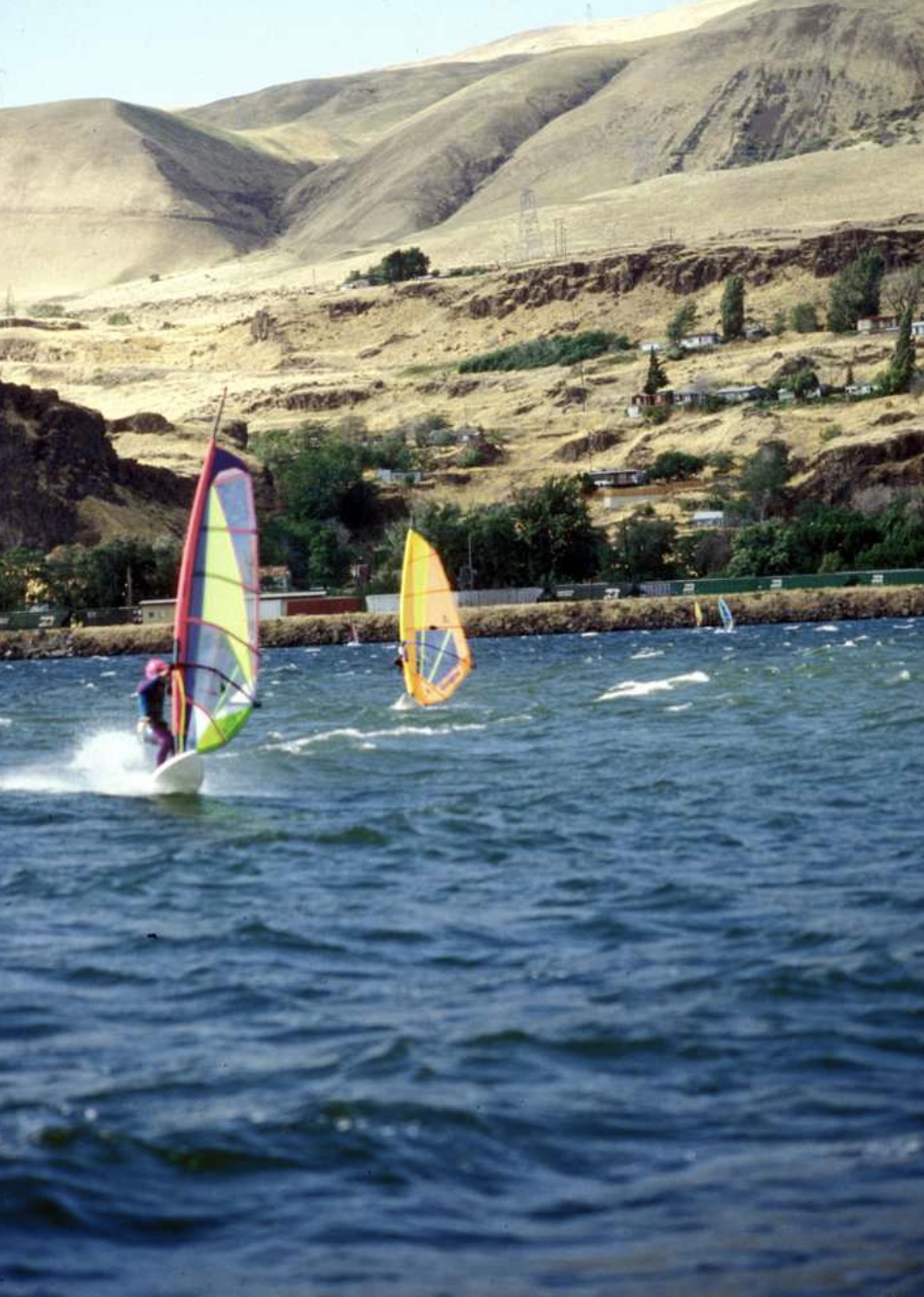 have you read my other posts from this trip? Click here to Start with #1 – The North Begins at Clare