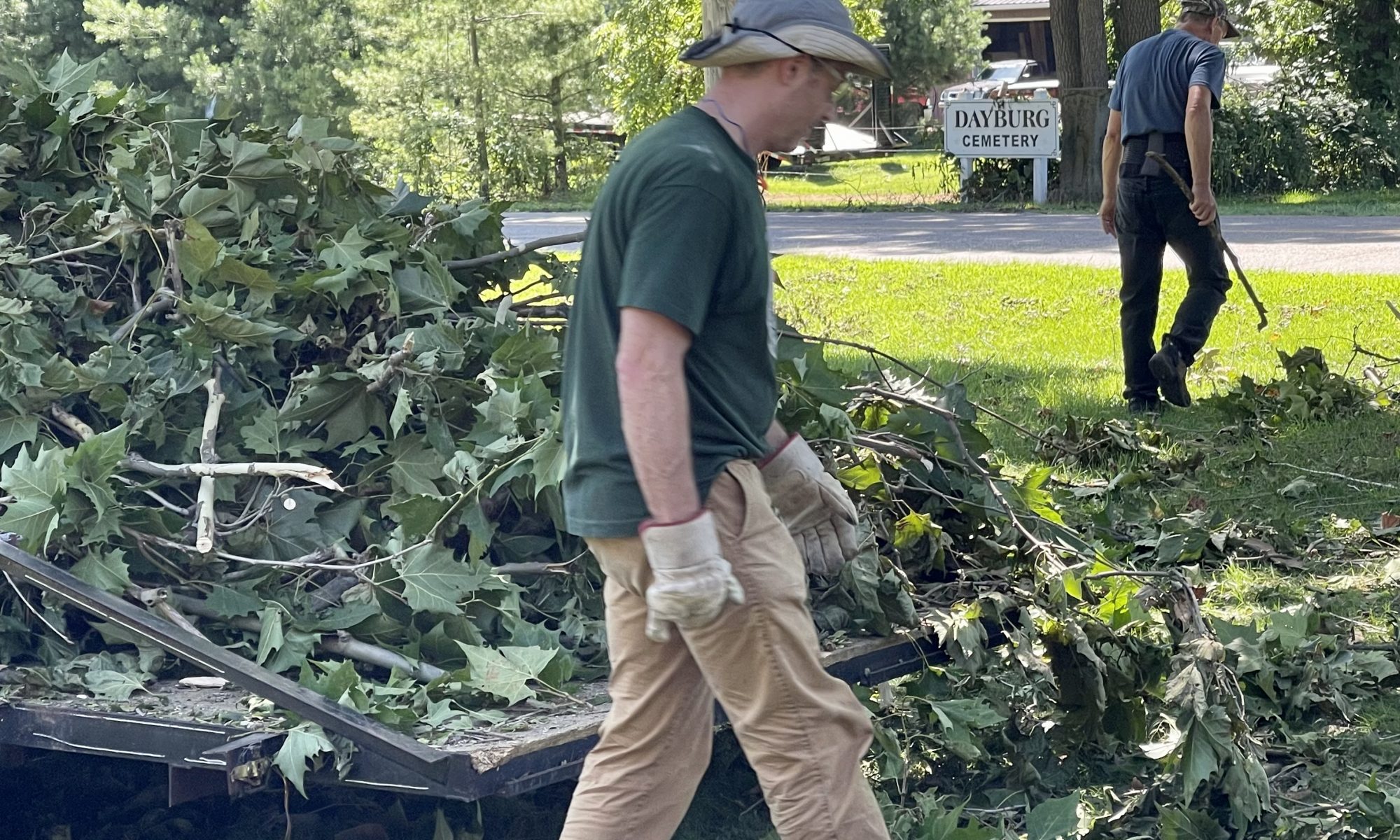 Storms. They’ve hit hard of recent. All over the world. Oftentimes in a rage I can’t even imagine.

I’m mostly familiar with storms in the two areas of the country where we reside –  winter and summer: Florida and Michigan.

We often watch the path of storms persistently brewing in the Atlantic. Haiti and Cuba know and suffer their wrath time after time. Year after year. Death and Destruction. Then they aim toward Florida.

A few years ago, we closely followed Irma, a hurricane headed for our little house near the Gulf of Mexico.  It made landfall just south of our house, then miraculously went inland, lessening its force. An answer to our prayer. As I write this, tropical storm Fred lurks in the distance. They’re all named, of course. Nice names. Common names. But their nice names cannot  camouflaged their fury. We’ve seen their wrath. They are wicked.

Instead of tropical storms, Michigan sometimes gets hit with thunderstorms and tornadoes. One summer day in Michigan, when I was young, Mama was fixing supper in the old kitchen of the big yellow house. Daddy stood by the back screen door, looking out to the back yard. I don’t remember any lightning or thunder – or even rain – but suddenly Daddy hollered, “Head to the basement..” And we did, along with our dog, Tippy. As I rounded the steps through the woodshed to the basement, I saw the huge Box Elder tree in our back yard uprooting. It was the biggest tree in our yard, and when we came up from the basement, it was laying flat, its massive roots extending twelve feet in the air and the length of its branches extending  well over 50 feet. The next day, my brother Larry and I converted the massive downed tree into a jungle, climbing its branches and hiding behind its massive trunk. It was a playtime for me, but now I know what an extensive and exhausting job lie ahead for my Daddy, as he cleaned up that tree. After the storm of that summer evening, I noticed that Mama kept a flashlight, lantern, and blankets in our big basement – just in case – and they were used more than once during storms in the years to come. Within a few years, I realized that storms didn’t mean playtime.

Unlike those in the tropics, storms here in our area of Southern Michigan aren’t named. We seem to refer to them by dates instead, such as The Palm Sunday Tornadoes. Occurring in 1965, we older ones remember that day when two killer tornadoes blasted through the county. Younger ones merely see the lasting results of the landscape and hear our stories.

After The Palm Sunday Tornadoes, we school children donned heavy pants and solid shoes, carried a sack lunch, and were bussed south of town to pick up debris in the hundreds of acres destroyed by the tornadoes. Observing fence posts drilled through trees and galvanized roofing wrapped around buildings like wax paper wrapped around a tootsie roll, we began to see the unlimited power of a tornado.

I’m not sure yet what this summer’s storms will be called. Perhaps The Storms of ’21. Within the last week, our southern Michigan area has been hit with several storms which have caused destruction, downed power lines, and wreaked havoc. 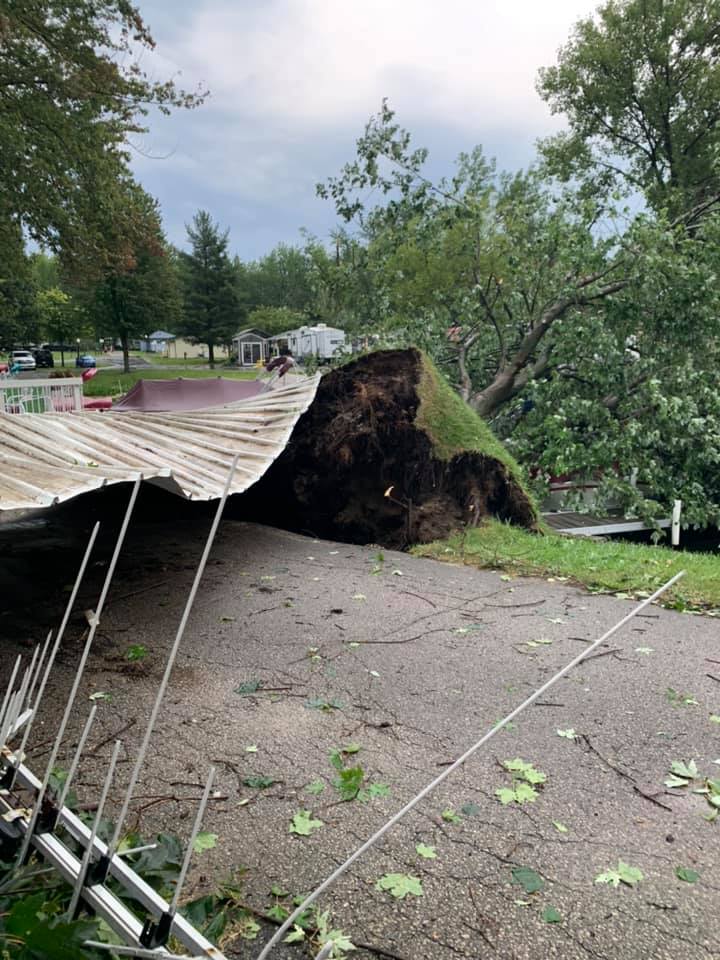 When whole trees blow down and their roots are pulled right out of the ground, you know you’ve had some powerful winds, very possibly tornadoes.

Our power immediately went off early Thursday morning, as did all of our friend’s and family’s in the county. Most were off for three days, but some are still off as I write this post. Some people have lost fresh and frozen foods in their refrigerators and freezers. Some struggle to find power for their medical devices. Some have generators to use. Others do not.

Even the hospital was using an emergency generator for a time.

But the loss of electrical power isn’t the worst things about storms for many. The Palm Sunday tornadoes killed people, and they devastated farms and property.

Unlike The Palm Sunday tornadoes,  no one was killed in this week’s storms – although one man was nearly killed when he was stirred out of bed by his little dog, seconds later, a massive tree crashing through his travel trailer, crushing his trailer in two – landing on the bed he had been sleeping on seconds before! In Isaiah 46, God tells us He uses whatever He chooses to fulfill His purpose. In this case, He used a little dog!  His purpose? To save that man. Isn’t He an amazing God? I wonder what He might have used to fulfill His purpose for me in that storm. And for you.

Although no one died, these Storms of ’21 did  cause significant property destruction. Our friends own a campground south of Quincy. Their livelihood was stricken, along with the falling trees around them. Campers sent home. Campground closed. Assessment of losses begins. 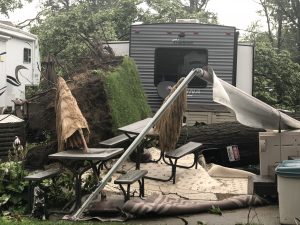 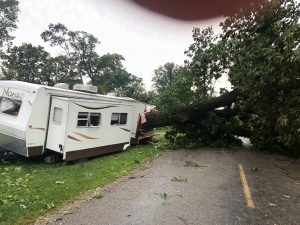 Another friend owns a wedding venue. Three trees damaged the pavilion, which is booked this weekend and each weekend thereafter. Booking of his VRBO rental lost as well. Money refunded. Income lost. Dreams shattered. Property destruction often results in losses beyond the structures themselves, but losses of income, as well.

As I wrote earlier, these storms wreak havoc. The damages seem overwhelming. Sometimes we suffer great losses. Oftentimes we’re at first in shock. It takes a bit to put things in perspective.  I recently wrote about fears of the prophet, Elijah. (Click here)

“Then a great and powerful wind tore the mountains apart and shattered the rocks before the Lord, but the Lord was not in the wind. . . “

Instead, the Lord spoke to Elijah afterward in a gentle whisper. (1 King 19) It’s a wonderful thing to hear God speak, most often through His Word, after a storm. Sometimes we just need to be quiet to hear His whisper.

All of our storms are not in the physical atmosphere around us. They more often occur in our every day lives. They are destructive and they create havoc just like a tornado or a hurricane. We know they are not from God. Jesus makes that clear to us. (John 10:10) They are from the enemy. But God helps us through them. Psalm 107 tells us how God’s people cried out to the Lord in their trouble, and He “calmed the storm to a whisper . . . What a blessing was that stillness that brought them safely into their peaceful haven again.”

You know, this chapter, Psalm 107 tells of the things we go through, but ends with, “Those who are wise will take all this to heart; they will see. . . the faithful love of the Lord.”

I’ve been through some difficult storms in life.  And the physical, atmospheric Storms of ’21 hit us, as well.  Like that first big storm of my childhood, there was no warning – no thunder or lightening – no rain – until the first part of the tree hit our house. Then the fury of the storm hit us. We lost power. We lost 7 trees in our beautiful yard, one hitting our house, lost numerous limbs and branches, and we ended up with a dreadful mess, which will take the kind of extensive and exhausting clean up my Daddy endured!  And like Mama prepared our family with light for a power outage, we need to prepare ourselves with the Light of God’s Word.

In perspective, we know God used whatever He chose to fulfill His purpose in our lives, and we trust that purpose to be good. For He is a good Father. Let’s be wise and take all this “to heart,” as the Word says, and “consider the great love of the Lord” (Psalm 107:43)

He calmed the storm to a whisper.

What a blessing was that stillness . . .

that brought us safely into harbor.

Following is Psalm 107. I hope it speaks to you. It’s the Light that brings us promise of God’s faithfulness. Maybe in a whisper!

Give thanks to the LORD, for he is good! His faithful love endures forever.

Has the LORD redeemed you? Then speak out!

Tell others he has redeemed you from your enemies.

For he has gathered the exiles from many lands, from east and west, from north and south.

Some wandered in the wilderness, lost and homeless.

Hungry and thirsty, they nearly died.

“LORD, help!” they cried in their trouble, and he rescued them from their distress.

He led them straight to safety, to a city where they could live.

For he satisfies the thirsty and fills the hungry with good things.

Some sat in darkness and deepest gloom, imprisoned in iron chains of misery.

They rebelled against the words of God, scorning the counsel of the Most High.

That is why he broke them with hard labor; they fell, and no one was there to help them.

He led them from the darkness and deepest gloom; he snapped their chains.

For he broke down their prison gates of bronze; he cut apart their bars of iron.

Some were fools; they rebelled and suffered for their sins.

They couldn’t stand the thought of food, and they were knocking on death’s door.

He sent out his word and healed them, snatching them from the door of death.

Let them offer sacrifices of thanksgiving and sing joyfully about his glorious acts.

Some went off to sea in ships, plying the trade routes of the world.

They, too, observed the LORD’s power in action, his impressive works on the deepest seas.

He spoke, and the winds rose, stirring up the waves.

Their ships were tossed to the heavens and plunged again to the depths; the sailors cringed in terror.

They reeled and staggered like drunkards and were at their wits’ end.

He calmed the storm to a whisper and stilled the waves.

What a blessing was that stillness as he brought them safely into harbor!

Let them exalt him publicly before the congregation and before the leaders of the nation.

He changes rivers into deserts, and springs of water into dry, thirsty land.

He turns the fruitful land into salty wastelands, because of the wickedness of those who live there.

But he also turns deserts into pools of water, the dry land into springs of water.

He brings the hungry to settle there and to build their cities.

They sow their fields, plant their vineyards, and harvest their bumper crops.

How he blesses them!

They raise large families there, and their herds of livestock increase.

When they decrease in number and become impoverished through oppression, trouble, and sorrow, the LORD pours contempt on their princes, causing them to wander in trackless wastelands.

But he rescues the poor from trouble and increases their families like flocks of sheep.

The godly will see these things and be glad, while the wicked are struck silent.

Those who are wise will take all this to heart; they will see in our history the faithful love of the LORD.

6 Replies to “The Calm After the Storm”