Daddy and Mama bought the big yellow house when I was 13 months old. Surrounded by red barns, white board fences, chicken coops, and corn cribs, the house sat on 80 acres of fields, pastures, and woods, bordering a creek. They paid $10,000 for it. Grandpa Nutt said they’d never live to see it paid! But he was wrong.

They did! They paid the mortgage in full by mid life.

Daddy and Mama were hard workers, very frugal – didn’t charge, didn’t live beyond their means. As the years went by, they maintained the house and slowly made improvements as they could afford: a remodeled kitchen, blown-in insulation, aluminum storm windows, and baseboard hot water heat – typical 60’s-style upgrades But one aspect of the house never changed – the woodshed. 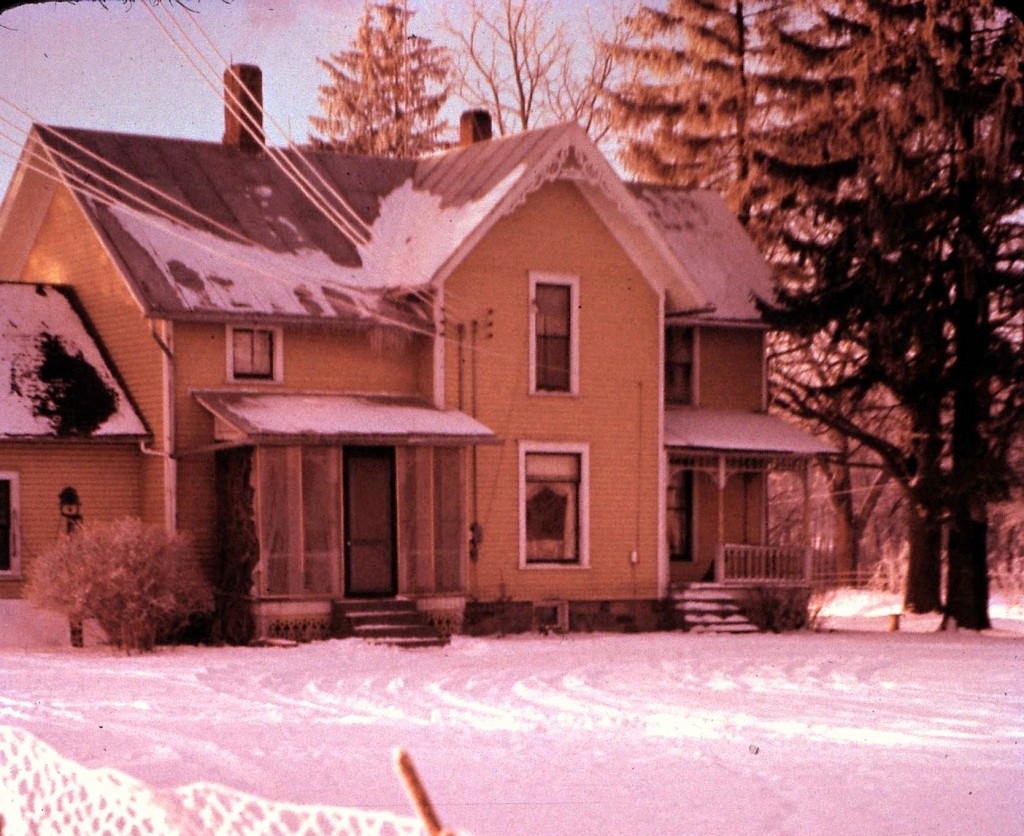 The woodshed was actually the large, attached back portion of the house, but it was rough and unfinished inside. From the north, a door led into a corner of the woodshed we called the milk house (a room where the milk was brought in from the milking barn). The big slider door (the one we always used) opened to the east. The inner wooden slatted walls, were covered with hooks and nails, holding garden hoses, rakes, and corn brooms (one good and several worn). Lofts stored empty coffee cans, out-of-season window screens, and “who knows what” treasures, hidden through many years. The basement door, which closed only by a hook, was in the southwest corner of the dark, often dank room – the woodshed.

The years passed. Limited social security income allowed no further improvements on the house or the property – and certainly not the woodshed . Dementia and crippling disease stifled all maintenance. As Daddy and Mama aged, so did the house. It cracked and creaked and sagged. Its outside became worn, sun bleached, and peeled. It forgot all of its glory. It lost its hope. But I never forgot. I loved it just the same. Aging doesn’t change love.

Daddy left the house first – went to the nursing home. (And that’s another story.) Mama followed – joining him (or so it seemed) in the same nursing home.

The once vibrant yellow house was now cold and empty.

Utility bills, property taxes, and insurance premiums continued to fill the mailbox every month. The social security income was now transferred to the nursing home. The yellow house was being deprived of its nourishment. It was slowly dying.

Reality set in: The house had faced it and now so did I.

Daddy and Mama wouldn’t be coming home to the big yellow house.

Daddy passed first; Mama shortly after. The white hearse had driven each of their coffined bodies around the circle drive, pausing near the front door. It was their goodbye and the house’s goodbye to each of them. The hearse then crossed the road and traveled the long lane to the cemetery to be buried within sight of their big old yellow house.

Because I loved the house, I wanted to feed it and nurture it and revive it. And I knew that Daddy and Mama had wanted the house to live on and be filled with young, new life – with family.

So the time came to once again renovate, upkeep, and maintain the big yellow house.

Builders, plumbers, drywallers, painters, electricians, and furnace installers began slowly reviving the old structure. Three coats of paint moisturized and refreshed its outer surfaces. Its foundation received a “tuck” and a “lift.” Its walls and its floors were recoated. But the most drastic revitalizing came in transforming the woodshed. Now the house felt complete, as the woodshed became a true part of its body and soul. And in the process of rejuvenation, a few hidden items were discovered up on its dusty lofts: a white rubber boot, which once belonged to the little girl in the house;  a couple of antique pulleys; a Michigan Stove Co cast iron stove flap; a child’s red plastic wallet; and a pair of black and white saddle oxfords. 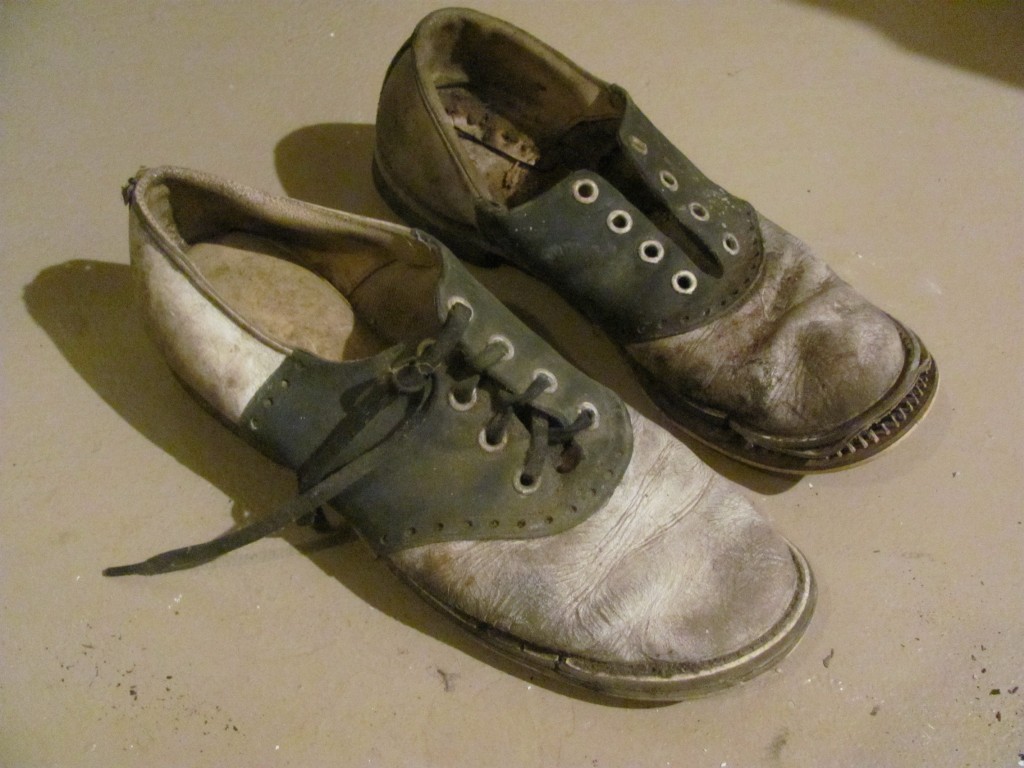 The oxfords revealed their age, just as the house and the people within it had. I wondered who had worn these shoes. I took them home and placed them beside sympathy cards and death certificates.

Then one day, browsing through mementos, I saw the photo, and in it, Mama was wearing the saddle oxfords.

She was young then, as were the shoes. 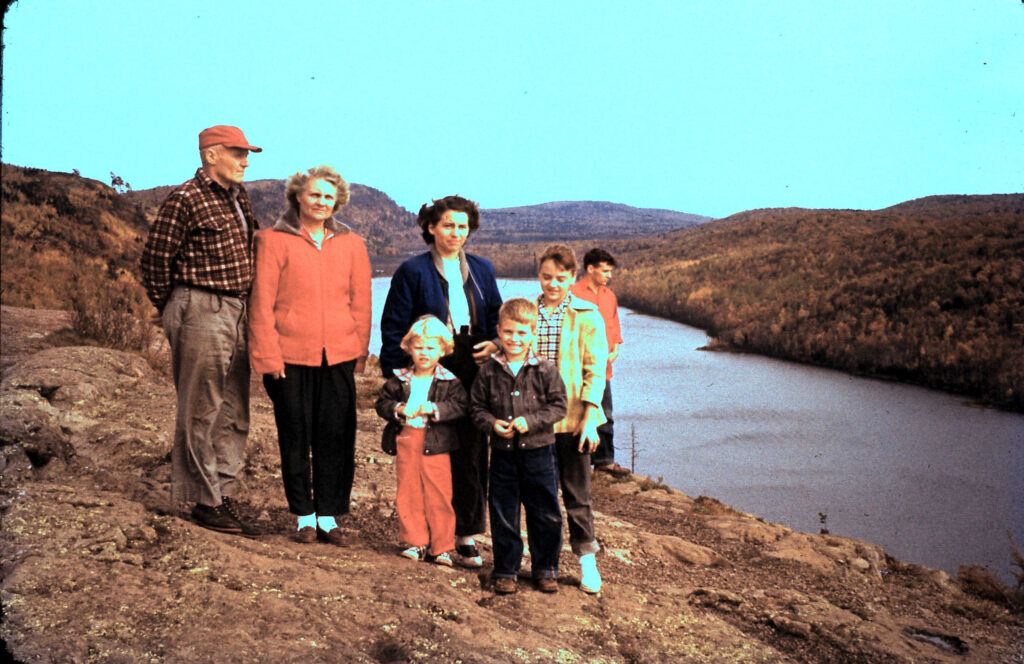 I remembered the setting: Lake of the Clouds in Michigan’s Upper Peninsula – an annual summer vacation to stay at my Grandpa’s cabin – obviously an autumn trip this particular year.  Browsing the other photos brought back fond memories, and I realized that I was wearing saddle oxfords in those photos, also! The year was 1955; I was four years old. I closed my eyes and tried to go back to that time – to those years – to that life in the big old yellow house.

I imagined the shoes on the floor of her bedroom, under the metal clothing rack.

I imagined her taking them to the backroom and polishing them from time to time with both white and black shoe polish.

And I imagined her one day, placing them on the upper loft of the woodshed, assuming she wouldn’t be wearing them again.

My upper chest hurt to think of that day – the day she went from young to old. 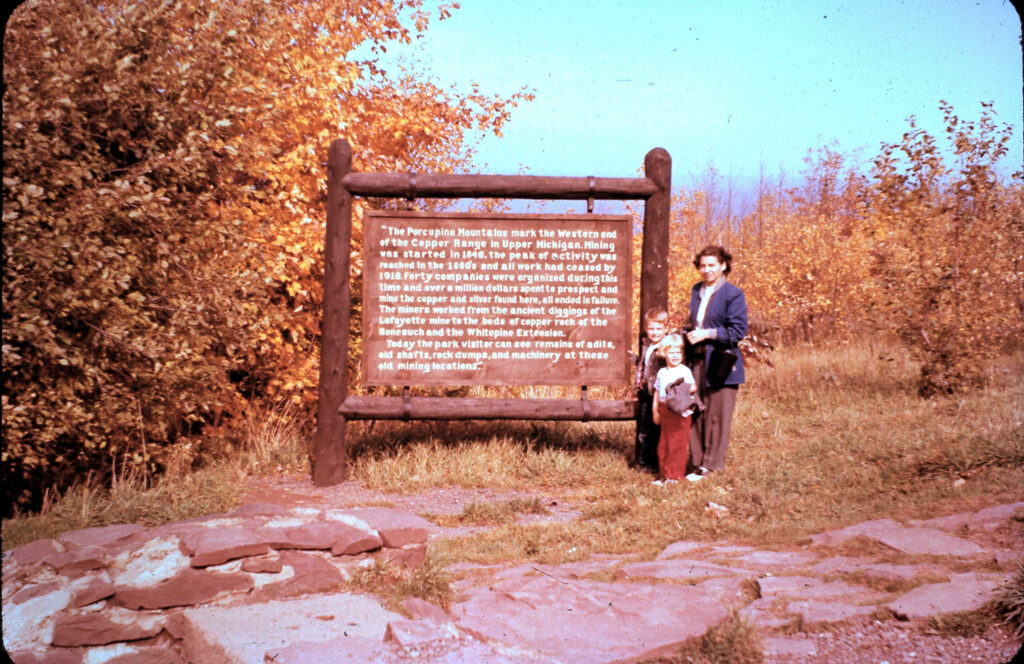 She’s gone now. But I have her shoes – her old shoes – her saddle oxfords – those she did not intend to keep. Perhaps others would throw those old shoes away, but I won’t.

I’ll get some leather cleaner.

I’ll enlarge and frame the photo.

Then I’ll set the shoes next to the photo,

I’ll place this little grouping somewhere in my house – will probably move it from one place to another – from time to time.

And as I’m moving through my house, cleaning, or rushing, or multi-tasking, I’ll pause when I see the photo and the saddle oxfords. Sometimes I’ll cry. Always, I’ll smile. And I’ll think of my Mama who once was young and then was old and lived in the big yellow house. 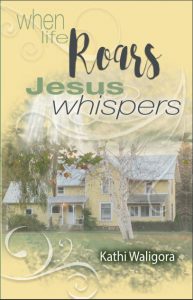 Click here to order my book, When Life Roars, Jesus Whispers and/or Shh! Listen to His Whispers, my recent Bible Study.

Thank you for reading my blog/journal posting. Please “subscribe” (it’s free!) to my postings (see the mid/right side of this page). Then you’ll be notified by email of each posting. –

6 Replies to “Treasures from the woodshed.”